Life in the Slow Lane: Dogs and Cats 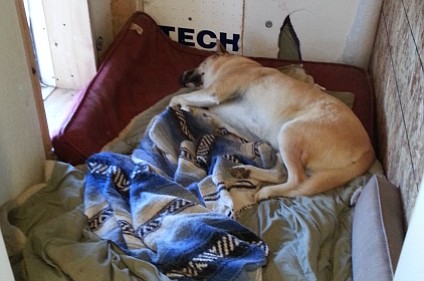 Moosie in the dog house

My dogs are about to be famous. Okay, probably not famous-famous, but more famous than they are now. In the next few days their first book will be published. That's right. The illustrator is finished and my seventeenth book is on its way to publication.

Seventeen books! Hard to believe. It's even harder to believe that I actually wrote a children's book. Unlike many authors who have always wanted to write for children, I never have. Now I've not only done it once, I'm considering doing it again. Me! I never expected to depart from my usual swords, rats, fleas, blood, gore and plagues, and certainly not for talking dogs and pigs that want to use "P" words because they're "p-p-p-pigs".

Then Moosie and Bear happened.

That I fell in love with a couple of dogs is even more astonishing to me than writing a children's book. I was convinced I was a cat person. Most writers are. Dogs bark while cats are quiet. Dogs always want attention while cats sleep twenty-two hours a day. No need to walk the cat, not when they use a litter box. And cats don't take up much room on a mattress. (Except for Fat Girl. She's not allowed to sleep with me since she pushed me out of bed.) Five cats would take up the space that Moosie needs were I to ever allow him to sleep with me. For Bear, I'd need a new bed. Even without me in it, mine's too small for him.

Maybe it just these particular dogs. They are so bonded to each other that they don't ask much of me except steady meals and a nightly cookie or two. Moosie rarely barks, only making noise when there's really something scary out there. Lately, that means Javelina. He hasn't forgotten the damage that one of those nasty critters did to him. Bear does bark, but not because he expects any reaction out of me. He's just doing his job, ma'am.

They don't even ask me to play with them. No sticks or balls or frisbees required for these two. Instead, they stalk each other across the pastures, Moosie waiting until Bear's almost on him before he explodes into motion, racing away faster than Bear can move; Bear crouching behind a tree waiting to pounce and Moosie pretending he doesn't see the white bulk sticking out from either side of the trunk. I've seen Moosie run up to the pasture berms at full speed (which is impressive--he's really fast), then launch himself into the air, his feet tucked under him and his eyes shut as he soars for the briefest instant. Bear loves the icy grass and rolls onto his back, all four feet in the air as he rubs his spine into the cold earth. He's in his winter glory right now, choosing to sleep out in the frosty air instead of joining Moosie in their well-insulated and cozy dog room, which is attached to my kitchen.

Perhaps I've mistaken them. Maybe they're cats in disguise. Very large disguises. When Moosie was a pup he followed the cats as they walked the narrow line of the walls that prevent you from tumbling down the hillside into the Mason Ditch. He never considered that walking a wall top was a "cat thing". When Bear came, Moosie taught his buddy to do the same thing. Now they prefer the wall as their passageway to the far end of the property.

Not that they've fully mastered "cat-ness". Despite his careful study and great effort, Moosie cannot climb trees. And believe me, he has tried. Those pesky squirrels taunt him from the treetops. He scratches, gouges, leaps and clutches as he tries to turn toenails into claws. Bear, being bigger and lazier, or maybe smarter, at least about this, knows better than to even try.

So, I guess I'm going to have to accept that I'm now "Bi". I can no longer imagine a life that doesn't have both cats and dogs in it.

At least, these dogs. And maybe not all cats, especially the ones that kick me out of my own bed.