2016: The year that was in Clarkdale
Blossoming festival scene, environmental and historic preservation, uptick in housing and business brighten 2016 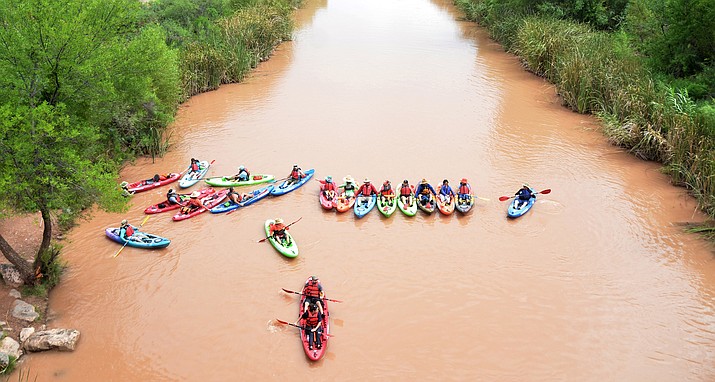 In 2016, Clarkdale’s establishment of quiet zones and changes in permit procedure have doubled the number of commercial outfitters while at the same time greatly reducing citizen complaints about noise and trash. VVN/Vyto Starinskas

CLARKDALE – The Town of Clarkdale wraps-up 2016 with a blossoming festival scene, recognition for its environmental and historic preservation and an uptick in housing and business development.

In recent years, the Town of Clarkdale has learned to do more with less as it trailed other Verde Valley communities in sales tax revenue. That same efficiency, however, appears to have positioned Clarkdale for a strong comeback.

With town council’s recent approval of the Rain Spirit RV Resort at 551 Broadway, owner Gary Clouston posted signage on the 9.5 acre site, which is expected to house 70 units. Council requested that Clouston make some adjustments, such as incorporating additional water conservation measures and reducing light glare. The site had already undergone some infrastructure development for a church that failed to materialize.

Once tested and identified, eligible homeowners are able to have their existing soil and landscape replaced at no charge.

On Jan. 26, residents packed a flood planning meeting presented by local and county public safety officials. In a town so closely associated with the Verde River, February traditionally ushers-in the potential for flooding.

The town’s Community and Economic Development Department launched a series of wayfaring signs to help direct visitors to Clarkdale businesses, as well as create a sense of place. Local businesses pay a fee to be included on the markers, which are to be installed along SR 89A and Broadway Road.

Also painting a brighter economic picture for Clarkdale was the department’s SR 89A Focus Area Plan, unveiled by Senior Planner Beth Escobar to the Planning Commission on May 17.

By including business, staff and resident feedback, an appropriate use of available land was mapped for the highway corridor linking Clarkdale with Cottonwood and Jerome. Some challenges to new business include lack of access off SR 89A due to ADOT-mandated curbing, as well as some irregular shaped parcels due to adjacent ditches and roadways.

Later in the year, Escobar unveiled the Bitter Creek Industrial Area Focus Area Plan, which merged current and future industry with parks, trails and even a possible overhead tram linking visitors to the Verde Canyon Railroad with downtown Clarkdale. Other pending focus areas include the Broadway Corridor and the Arts and Entertainment District.

The town also got a handle on its kayak permits. As of May 30, just 618 permits had been issued out of the available 8,138, leaving 7,520 permits as-yet unallocated. Last year, the number of kayak permits issued totaled 1,715, with over 6,000 permits issued in 2014 - - the year in which some residents had complained about noise and litter from various watercraft users.

“We are pleased to report our quiet zones and changes in permit procedure have worked well,” said Mabery. “Last year, we only had two outfitters. Now we have four, but two are brand new at the business.”

2016 drew Clarkdale’s largest crowd ever - - about 1,000 people - - to one of its free Concerts in the Park events. This year, renowned acts such as the Cadillac Angels, Matchbox Twenty Too and NAZBA International Blues Competition were featured. Also proving popular were the Old Fashioned 4th of July celebration, Clarkdale National Night Out and the end-of-summer Poker Stroll.

Clarkdale once again implemented water conservation measures and fire restrictions during the summer season, running from June 15 to Aug. 15.

The town also came to terms with addressing food truck operations, as well as considering joining Cottonwood in outlawing tobacco sales to those under 21 years of age - - the fate of which rests with town council.

The Aug. 31 primary brought none of the heated contests found in other Verde Valley communities. Mayor Von Gausig, Vice Mayor Richard Dehnert and Council member Scott Buckley all ran unopposed in their bid for incumbency.

The existing 90-year-old steel water mains are being replaced with new PVC material in an area extending from Ninth St. to Sixteenth St. and from Third South St. to First North St.

On the environmental side, the Town of Clarkdale was awarded a 2016 Local Government Excellence Award for its recycling of rain water for use in landscape irrigation of town property.

One year prior, Utilities/Public Works Director Wayne Debrosky accepted an Award of Merit from the Arizona Forward Environmental Excellence for its reclamation project using a refurbished wastewater treatment system from Surprise, AZ financed by the Water Infrastructure Finance Authority (WIFA) that raised the town’s effluent rating from Class B to Class A+ while saving taxpayers $8 million compared to a new system.

With the close partnership between the town’s Community Services Department and the Clarkdale Business Alliance, festivals took center stage in Clarkdale this fall. Beginning with Main Street Clarkdale Oct. 1 through Halloween events Oct. 31, record crowds attended Trick-or-Treating in Upper Clarkdale, the Costume Contest at the Park Gazebo and the Howl-O-Ween Pet Spooktacular at Town Park.

As 2016 fades into 2017, Clarkdale looks ahead to continued growth balanced with environmental and historic preservation. In a recent presentation to the Verde Valley Regional Economic Organization (VVREO), Filardo reported a 67 percent increase in building permits, a new Cottonwood Area Transit (CAT)-based wine tasting tour and a cooperative marketing program with the Arizona Office of Tourism. And the new website www.experienceclarkdale.com launched by the Clarkdale Downtown Business Alliance offers tourists interactive tools to plan their 2017 vacation in Clarkdale.