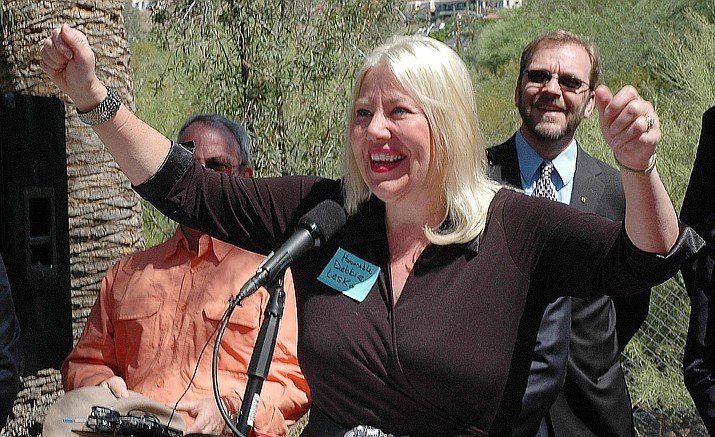 Sen. Debbie Lesko at the ceremonial signing of legislation earlier this year blocking local government from banning or imposing most restrictions on homeowners who want to rent out rooms or entire homes to vacationers. (Capitol Media Services file photo by Howard Fischer)

PHOENIX -- Arizonans who like to rent out their homes to visitors and don’t want local officials to stop them will benefit from a new law taking effect Sunday.

So will motorists who drive while drugged, speeders who get photo radar citations and individuals and corporations who don’t pay their taxes on time.

Those are among new laws which take effect Jan. 1 along with more than a dozen others approved this past year by the Arizona Legislature.

One measure with potential implications for neighborhoods involves that issue of short-term rentals.

Sen. Debbie Lesko, R-Peoria, originally simply to eliminate the requirement that homeowners collect local taxes every time they rent out a room or a whole house through “sharing’’ services like Airbnb. Now, online firms will collect the applicable taxes and forward them to the Department of Revenue which would send them to the affected jurisdictions.

But Lesko also tacked on language which says cities, towns and counties cannot prohibit or restrict these rentals simply because the property is not classified as a hotel.

In signing the measure earlier this year, Gov. Doug Ducey said the legislation provides “financial breathing room’’ for families by allowing them to earn something extra.

The law, however, covers more than those renting out a bedroom -- or even their whole home.

There is no limit to the number of properties an investor can buy and days a home could be rented out, all in the same area, potentially turning a neighborhood into a vacation rental zone. But the governor at the signing ceremony brushed aside questions of whether that could change an area’s character.

“I’m not going to answer these hypotheticals,’’ Ducey said.

The League of Arizona Cities and Towns agreed not to oppose the measure after it was amended to allow regulations to preserve local health and safety. But not everyone at the Capitol was convinced that allowing anyone to open up one or more homes to vacation rentals is in the best interests of others already living in an area.

“I didn’t move into a neighborhood to have the house next door to me turned into a weekly rental property,’’ said Sen. John Kavanagh, R-Fountain Hills, in voting against the measure.

And Sedona City Attorney Robert Pickels, in testifying against the proposal, told lawmakers this is none of their concern. He reminded them of their objections when the federal government imposes its will on the state.

The practice of renting, though, appears popular -- and potentially lucrative.

Airbnb spokeswoman Laura Rillos said her firm has about 7,900 “hosts’’ in Arizona with a typical listing by a host being booked 44 nights a year. Rillos said a typical host earns about $4,900 a year.

Earlier this year lawmakers took photo enforcement off state highways. But that still leaves the option for cities, towns and counties to have speeding and red light cameras.

The new law which takes effect Jan. 1 bars the Motor Vehicle Division from suspending the licenses of people who fail to respond to citations delivered by “alternative service.’’

“The government think it’s OK to tape that notice to your door,’’ said Rep. Michelle Ugenti-Rita, R-Scottsdale, with no proof that it didn’t simply blow away. She said that means someone who has not seen it and did not go to court can have a license suspended without knowing it, meaning a possible arrest if pulled over.

Lawmakers separately agreed to carve out an exemption from existing law which require motorists convicted of driving while impaired to install an ignition interlock for at least six months. That device is designed to prevent a vehicle from starting unless the driver delivers a “clean’’ breath sample.

This new law says that requirement is no longer automatic if the conviction was for driving under the influence of drugs. Proponents said the interlocks, which can cost up to $200 to install with monthly rental fees up more than $100, make no sense if the offense had nothing to do with alcohol, the only thing the interlocks can measure.

Another new law eliminates the ability of the Department of Revenue to impose penalties if someone substantially underpays the amount of money owed. That has been defined in statute as being short by at least 10 percent or $2,000.

Legislators accepted arguments by the Arizona Association of Certified Public Accountants, the people who are doing tax returns, that their clients should not be penalized if they come forward of their own accord. But the relief is not available if the taxpayer is already being audited by the state or it was the

Businesses that set up shop in the state’s two largest counties can now escape the cost of having to publish their articles of incorporation and other legal notices in newspapers. Instead, they can now have their notices “published’’ at a new web site set up by the Arizona Corporation Commission.

Rep. Steve Montenegro, R-Litchfield Park, limited his measure to Pima and Maricopa counties in part for political reasons: Similar bills in prior years to eliminate publication requirements statewide have been defeated as rural lawmakers sided with local publishers who complained that the loss of revenues could damage or even kill their newspapers. But future measures could expand the law statewide.

Another new law approved during the 2016 legislative session appears prescient.

State and local election officials must to mail out pamphlets to every household with registered voters ahead of elections detailing the measures on the ballot. As of Sunday, future contracts for printing and distributing pamphlets must have a provision which fines the private firm a penny a day for each household that does not get the mailing on time.

Secretary of State Michele Reagan answers questions earlier this year about the failure of her office to get about 200,000 election brochures to voters on time ahead of the May special election. (Capitol Media Services file photo by Howard Fischer)

Two months after the governor signed the measure Secretary of State Michele Reagan failed to get out about 200,000 of 1.9 million brochures before early voting started for the May special election. Press aide Matt Roberts said while the fault lies with an outside company that made up the mailing lists, the foul-up is Reagan’s responsibility.

That foul-up drew an angry reaction from Mark Brnovich who said it “pisses me off, as an Arizonan, as the attorney general.’’ An investigation by a former federal prosecutor to see if laws had been broken is ongoing.

Other new laws kicking in Jan. 1 include:

• Providing free vehicle registration to spouses or dependents of those in the military killed in action;

• A requirement that new rental agreements at mobile home parks specifically disclose in writing if the tenant and not the park is responsible for maintaining any trees in the space;

• Allowing candidates for local and federal offices to get all the signatures they need for nomination through an online portal maintained by the secretary of state instead of having to gather signatures on paper;

• Permitting city and town governments to sell off land worth up to $1.5 million without first getting voter approval; the current threshold is $500,000;

• Setting up a separate property tax category for vacant land which has a conservation easement that limits development by the owner.