One year later, Trivia Night has become a Sedona favorite 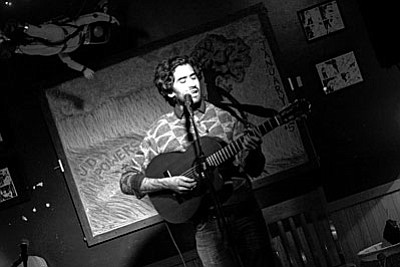 Trivia Night celebrates its one-year anniversary at Vino Di Sedona! Trivia has been the theme the first Wednesday of every month since February 2015!

Triviameister NeuroZach hosts by offering five rounds of customized questions, each round a different theme, offering Sedona residents and visitors alike the chance to win prizes and bragging rights.

A few months into hosting Trivia Night Zach invited DJ Lounge Lizard D to join in and make the night more interesting with his fine selection of vintage records and unique banter.

During the rounds, Lounge Lizard D injects music into the proceedings, takes over between rounds, so there's always some kind of party going on. Join NeuroZach and Lounge Lizard D Feb. 3, 7-10 p.m., for fun and trivia!

Jeremy Douglas Powers takes the spotlight at Vino Di Sedona on Thursday, Feb. 4, 7-10 p.m.. Hailing from the great plains of the Midwest, Jeremy draws from a repertoire of well known favorites from the past and present, as well as his own melodies which have been described as "haunting and catchy."

His most recent collection of songs, entitled "The Happy Vortex EP", features only piano and voice, which differs considerably from his earlier collections which sound more akin to pop and folk rock.

As a seasoned singer-songwriter, Jeremy delivers his songs with a James Taylor-like style of finger picking and an ear-catching richness in his voice. His demeanor is contained but his voice can be anything but.

To listen to his music, visit jeremydouglaspowers.com.

Listen to beautiful piano music by Richard DeGroot while sampling wine at Vino Di Sedona's weekly wine tasting on Saturday February 6, 3:30-6:00 PM. Richard received a piano performance degree from the University of Northern Iowa in 1992, played at Old Faithful in Yellowstone National Park, and has traveled through parts of Europe playing piano including Barcelona Spain. Richard currently plays in Ouray, Colorado,during the summer tour season. He has a classical background, but also plays a lot of ragtime, pop tunes, Broadway tunes, and easy listening.

Originally from London, he went to school in NYC where he also worked for Sony and wrote music for musicians like Daryl Hall and Jennifer Lopez. Lux's music career next took him to Hawaii, then Los Angles. After completing a year-long tour with Tiffany, his flute playing wife, they are now Sedona residents and becoming popular in the area's music scene.

Both events offer a night of fun and music, musicians and audience members are welcome. Coming soon, music on Mondays!