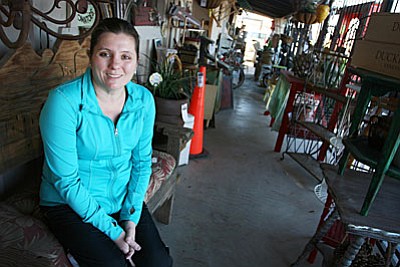 Judy Boyd, store manager at Ruby Road Resale on SR 260 in Camp Verde estimated in 2016 that two out of five customers became aware of the store’s goods through online shopping. Arizonans are now paying more money to state and local governments for the items they're buying online, thanks to a levy that began about two months ago. (VVN file photo by Bill Helm)

VERDE VALLEY - With over one-third of people under age 34 preferring to buy online (per a recent survey by Business Insider), local governments are waking-up to the fact that a significant source of tax revenue may be slipping through their fingertips.

The bill failed to pass.

A year ago in Cottonwood, Administrative Services General Manager Rudy Rodriguez proposed to city council a municipal "use tax."

Although large retailers already collect state, county and local taxes from online customers, not all vendors do.

And with the Internet blurring the geographic boundaries of both buyers and sellers, the amount of tax revenue lost remains a moving target.

How much sales tax are revenue are we losing?

Online retail sales using desktop computers were reported at $237 billion in 2014 - not including mobile devices, according to Statista.com. It also reported 41 percent of customers worldwide make online purchases.

In Arizona, Rep. Mark Cardenas, D-Phoenix estimates $190 million in tax revenue has been lost in uncollected online sales tax, according to the Arizona Daily Star.

For shoppers under 34 years of age, an average of $2,000 is spent online each year, according to an analysis by Business Insider.

Taxes from sales transactions (called "Transaction Privilege Taxes" in Arizona) are levied by government entities for the privilege of conducting business.

The task of collecting state, county and local taxes (if applicable) is left to the retailer, who then remits payment to the Arizona Department of Revenue for distribution.

Depending on where you live, purchases may or may not be subject to taxation by your city or town.

Why do I have to pay sales taxes for online purchases?

If a vendor has a significant presence (or "sales tax nexus") in Arizona, they are expected to collect state, county and -- if applicable -- local sales tax from customers.

By "sales tax nexus," that means the vendor has an Arizona presence in one or more of the following:

• Place of business or office

• Delivery of merchandise within Arizona by vendor-owned vehicles

Other than these scenarios, local governments stand to lose when purchases are made online from out-of-state vendors.

"So if I sell locally, I have to pay sales tax. If I sell only from California, I don't," said Rodriguez.

What if I buy something from another state?

In some cases, even an out-of-state vendor may be required to collect sales tax from Arizona buyers.

An example of this is Amazon.com.

Amazon has a distribution warehouse in Goodyear, AZ. If a Florida vendor stores items in the Goodyear warehouse for delivery, an Arizona buyer is obligated to pay (and the vendor is expected to collect) sales taxes.

While Amazon collects taxes from consumers at the time of purchase, not all online retailers do.

What if no taxes are collected from my online purchase?

Some people would argue that they purchase items online without being levied sales taxes.

This may in part be due to the complexity of calculating various local as well as state and county taxes throughout the United States.

Even if the seller does not remit taxes to the state, technically, the buyer should.

In Arizona, buyers are obligated to remit payment to the state revenue department by declaring the amount on their year-end tax return.

Ruby Road Resale and Vendor Mall in Camp Verde has both a "brick and mortar" store as well as inventory posted online on Craigslist.

While a customer may become aware of an item while browsing online, they still need to complete the transaction at the Camp Verde store.

That's when state, county and local sales taxes are collected.

"We get quite a few people from Sedona, Flagstaff and Phoenix," said store manager Judy Boyd. "Craigslist is quite good for us."

"We have a lady who comes in weekly to do our Craigslist postings, and the owner updates it daily," she said.

Boyd estimates two out of five customers became aware of their goods through online shopping.

One advantage a "hybrid" retailer has over purely online retailers is the impulse sale.

"They usually buy about three more items when they come to pick-up their purchase, said Boyd.