Aftershock crew has busy weekend with meets in Albuquerque and Flagstaff 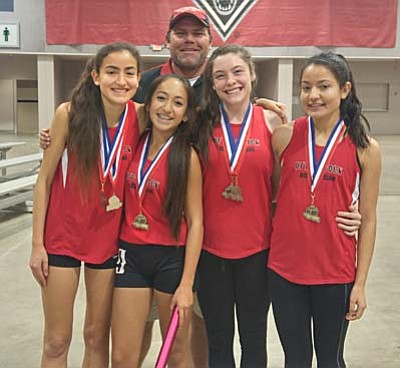 Micah Swenson (back) poses with his 4x800m relay team of (L to R) Allyson Arellano, Destini Lobato, Penny Fenn and Karen Arellano after they set the meet record at the Great Southwest Indoor Classic for the third-straight year. (Courtesy Photo)

COTTONWOOD- The Aftershock Distance Club had a busy weekend, competing in two meets in two days. Head Coach Micah Swenson and his runners headed to Albuquerque, New Mexico on Saturday to compete in the Great Southwest Indoor Classic.

The Aftershock crew, had a 4x800m relay team compete for the third-year in a row. The event was first brought to the meet two years ago, and the team set the meet record with a time of 10:18. Last year they improved that time with a 10:06 clocking, setting the record again. Swenson said it was their goal to come back and break that record one final time.

"We had Destini Lobato run the opening leg," Swenson said. "She had to run against some tough competition and when the baton was handed to Penny (Fenn), we were in 4th place. Penny made up some good ground for us in her leg, getting us up into 2nd place but the third leg was crucial to our success."

Allyson Arellano ran the third leg for the Aftershock relay time, who were off pace for the meet record at this time. Fenn handed the baton off to Allyson and the younger Arellano sister ran a 2:20.90 800m leg, which was good enough to win the girls 800m event.

"Not only did she put us where the record was in reach, she took us from a distant second into a very dominate first position," Swenson said. "Karen closed the relay for us with a 2:28 leg. This solidified the win and meet record. Karen has been sick the last week or so and did a phenomenal job for us. In the seven years I've coached Karen, she's never ran a bad relay leg. She always performs well with a baton in her hand."

The relay team placed 1st out of four teams, setting the meet record for a third year in a row, with a time of 10:03.35.

The Aftershock runners also saw success in the mile event with three runners competing. Penny Fenn finished third out of 32 runners with a time of 5:31.22. Karen Arellano came in 15 seconds later with a 10th place finish. Jon Ulibarri finished in a respectable fifth out of 13 runners in the boys race improving his time from last year. Swenson saw the improvements his sophomore runner has made over the time of a year.

"Last year at this meet, he finished in last place and was lapped by the race winner," Swenson said. "This year, as a sophomore, he looked experienced and made several smart race moves to finish where he did."

The last event the Aftershock crew competed in at the Great Southwest Indoor Classic was the 3200m race, and with the meet running behind schedule the boys and girls races were combined.

"At 800m, when the pace was starting to slow, Allyson decided to keep the pace honest," Swenson said.

But no one followed the speedy Verde Valley runner and she ran the final 2400m out in front and all alone other than the boys that were racing ahead of her.

"She ran into a lot of trouble as the race progressed," Swenson said. "She had caught up to some of the boys who were doing all they could to not get beat by a girl. One boy kept surging ahead to stay in front of Allyson. Another boy cut her off terribly to the point that she had to come to a quick stop, jump over his leg back kick, and then speed back up to pass him."

Allyson finished with a time of 11:28 and placed first out of 10 female runners.

The Aftershock team made the close to 5-hour trip back to their home state of Arizona and competed at the Arizona Indoor State Championships at the NAU Skydome in Flagstaff the very next day.

On Sunday, it was Jenna Caccia who stole the show for the Aftershock crew with a pair of great races.

"In the 800m, she unleashed a huge kick to overtake some other girls for the 4th place finish," Swenson said. "The altitude was a big factor in the 1500m where Jenna was able to come in 2nd overall for the 9-10 girls."

Swenson had four runners compete in the 800m event and three of them set personal bests.

After a tough race in the 800m Ulibarri bounced back in the 1500m event with a 4:38.99 clocking which was good enough for a third place finish out of nine runners.

"His race was a great bounce back performance after a tough 800m," Swenson said. "He was able to make some smart moves and use a huge kick to take 3rd place in the event."

The Aftershock runners will be heading to the UNLV All-Comers Meet on February 20th for their next meet of the season.

In other Aftershock news, senior runner Karen Arellano will be joining teammate Penny Fenn by signing a Letter of Intent to run for the Avila University Eagles on Sunday March 13.