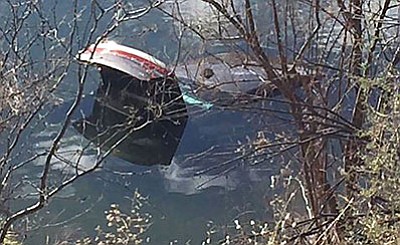 A new wrinkle has emerged in the reported kidnapping of a woman and son in Verde Village.

The mother and son were found safe at a home in the 500-block of N. Broadway in Clarkdale. They had reportedly been kidnapped at gunpoint about 6 a.m. Friday morning.

But, now Yavapai Sheriff's spokesman Dwight D'Evelyn reports that the 2016 grey Dodge Charger, reported stolen, has been found floating in the Verde River a few miles from the Broadway home. The car had apparently been rented by the homeowner at the Village Drive location in Verde Village.

D'Evelyn reports the woman had been forced into the Dodge Charger. Her 14-year old had been taken in the Dodge Neon, later found in Clarkdale after the reportedly kidnapped woman called Clarkdale police. Police and Sheriff's deputies from Yavapai County interviewed her Friday afternoon attempting to get a clear picture of what had happened.

Evidence technicians are on scene now and expect to recover the vehicle soon. Detectives have arrested a man residing at the Clarkdale Broadway home for his alleged involvement in the car theft.

It does appear this suspect has some involvement with the mother allegedly kidnapped this morning and was present during the altercation on Village Drive in Verde Village. This part of the investigation remains active as there may have been an altercation between the suspect and the victim before the Dodge Charger was stolen.

The Dodge Neon was located near the Broadway home in Clarkdale. Additional arrests are possible.

The woman and son from this morning's alleged kidnapping incident in Cottonwood have been found safe in Clarkdale, according to Clarkdale Police Department. Police continue to search for one of the suspect's vehicles.