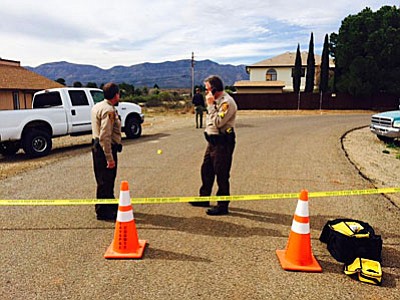 As police secure the scene, kidnapping victims are found safe in Clarkdale (Photo by Vyto Starinskas)

The victims of an early morning kidnapping in Verde Village have been found safe in Clarkdale according to Yavapai Sheriff's spokesman Dwight D'Evelyn. Detectives are now interviewing the woman named "Samantha" and a 14-year old boy said to be her son. The mother and son were said to have been kidnapped at gunpoint in Verde Village, near the Quick Country Store on Village Drive, south of Cottonwood.

A suspect vehicle was, meanwhile, thought to be on its way to the Phoenix area. OnStar or a similar service was reported by the phone company to be "pinging," showing the location of the reportedly-stolen Dodge Charger in the Black Canyon City area. That was one of the vehicles said to be involved in the early morning kidnapping.

The woman and son were being interviewed by Yavapai Sheriff's officials in the area of Patio Park, near the old Clarkdale smelter site. They are said to be in good condition. The Yavapai Sheriff's Office have not released identities, but the kidnap victims are thought known by suspects.

According to YCSO spokesperson Dwight D'Evelyn, the 2016 Dodge Charger, with Florida license plate BPV4583 has a broken driver's side window. The vehicle has been entered into a national crime data base as stolen.

A second vehicle was described as a silver Dodge Neon with unknown plates, said to have been occupied by Hispanic men. At the time of the kidnapping one suspect carried a shotgun and the mother and son were taken away in separate vehicles.

Suspects are considered armed and dangerous. Suspects could possibly be in the. Do NOT attempt to apprehend. Call 911 to report any suspect/vehicle sightings.