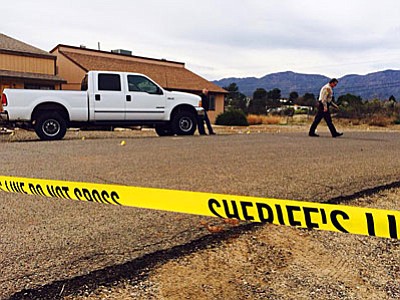 An apparent kidnapping occurred today at 2500 block of Village Drive in Cottonwood.(Photo by Vyto Starinskas)

YCSO is on the scene in the 2500 block of Village Drive in Cottonwood regarding an apparent kidnapping that occurred around 6 a.m. Friday.

Detectives are seeking help from the public in locating the victims, suspects and two vehicles involved. Please call 911 to report any information.

According to YCSO spokesperson Dwight D'Evelyn, the suspect vehicle is a gray 2016 Dodge Charger with Florida license plate BPV4583. The vehicle has a broken driver's side window. The vehicle has been entered into a national crime data base as stolen.

D'Evelyn said the suspect is believed to be an unknown Hispanic male armed with a shotgun and is considered dangerous.

The victim with the possible first name of Samantha said to be in her 30s, was forced into the Dodge Charger at gunpoint, according to D'Evelyn.

The suspect vehicle may be in the company of a silver Dodge Neon with an unknown license, D'Evelyn also said.

The Neon may contain two men and a 14-year-old boy, who was also apparently kidnapped during the confrontation. The 14-year-old is allegedly the victim's son, who was allegedly forced into the stolen Dodge Charger.

Detectives are working to identify these suspects, and updates will be provided as soon as possible.

Suspects are believed to be armed and dangerous.

Suspects could possibly be in the area of Cottonwood or Camp Verde. Do not attempt to apprehend.

Call 911 to report any suspect/vehicle sightings.