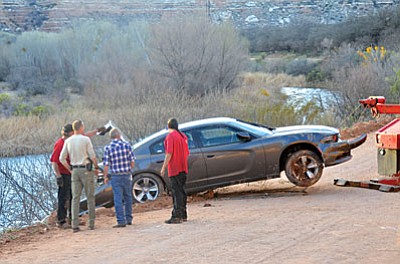 CLARKDALE - What began as a report of the kidnapping of a woman and her son Friday morning in Verde Village has ended with the arrest of two Clarkdale residents, including the alleged kidnapping victim.

According to a report from Yavapai County Sheriff's Office Media Relations Coordinator Dwight D'Evelyn, the original report of this incident being an armed kidnapping were false.

The incident, explained D'Evelyn, began during a dispute between 35-year-old Virginia "Samantha" Reyes of Clarkdale and a 36-year-old woman on Village Drive in Verde Village Friday morning. A 2016 Dodge Charger had been rented by the Verde Village woman from a Prescott business and also used by Reyes. Reyes met with the woman and claimed she owed her money for the car based on a prior agreement.

A confrontation ensued, according to D'Evelyn's report, and Reyes claimed she became concerned for her safety due to threats from the resident.

The Sheriff's Office media release states Reyes subsequently called Charles Fitzpatrick, 29, of Clarkdale, for help and he arrived at the Village Drive home in a Dodge Neon sedan around 6 a.m. with Reyes' 14-year-old son and another man.

"As the situation escalated," D'Evelyn's report states, "Fitzpatrick decided to take the Dodge Charger from the resident and he pushed Reyes into the car, then started to drive away. The resident attempted to prevent Fitzpatrick from leaving by striking the driver's window with a pipe, smashing the glass.

"Fitzpatrick continued driving and struck a man standing nearby who had come outside after hearing the commotion. The man fell to the ground with a non-life threatening injury to his leg. It was at this time the resident called 911 to report that Reyes had been kidnapped and her rental car stolen. There were also indications Reyes' 14-year-old son had been forced into the Dodge Neon before it drove away, but these allegations have been determined unfounded."

The report continues, Reyes later contacted law enforcement after hearing news reports that she had been kidnapped. Detectives eventually located her at a home in the 500 block of North Broadway in Clarkdale.

Reyes denied the kidnapping allegation, but eventually admitted Fitzpatrick had pushed her into the Dodge Charger before fleeing. Her son was also found at the Broadway home. The Dodge Neon was parked nearby.

"Reyes initially claimed no knowledge as to where the Charger was located," D'Evelyn's report states. "Fitzpatrick told detectives he parked the car near the Tuzigoot monument area. A short time later, YCSO received a report the car had been found floating in the Verde River. After the car was removed, a rock was found placed over the gas pedal in an effort to aid vehicle acceleration into the river. When confronted with the evidence, Fitzpatrick admitted dumping the car in the river hoping the vehicle would not be found."

Fitzpatrick and Reyes were subsequently arrested and face the following charges:

Bond has not been set for either suspect.