HDH seeing success inside and outside the ring 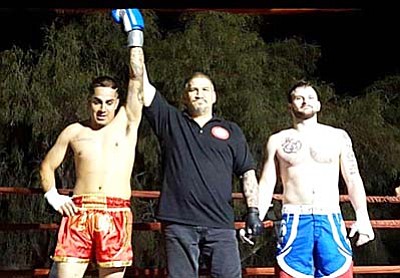 PHOENIX- They started in the field in Riverfront Park, then moved to a space donated to them at the Tom Jones Car Dealership on SR 260.

Since that time the HDH Kickboxing Club has found a new home, and are seeing success in the ring and outside of it. Club Founder and Owner Robert Gonzales started the club to help out youth who were getting into trouble, having problems at home, or were just in need of an outlet other than your regular sports to get in shape.

The club operates out of a close to 600 sqft building next to "The Laundry Room" on South Union Dr. in Cottonwood.

On a daily basis during the week, you can hear a bell sounding in three-minute intervals as drill changes, the participants get their water intake and head right back to work.

"We run everything off three-minute intervals," Robert Gonzales said, who says he's lost 25 pounds himself since starting up the gym. "They get their water in the 30-seconds between each drill and then get right back into it and that goes for about 2 hours."

Sit-ups, push-ups, and other miscellaneous drills are usually what you will see HDH Kickboxers working on while mixing in the basics of kickboxing and boxing techniques.

Some participants get in the ring eventually but Gonzales is in no rush to make anyone jump in the ring before they are ready.

You might have seen a younger Santana in the first story published about HDH throwing a push kick in the grass at Riverfront Park. Since then she's stuck to the program, and last Saturday evening came home with her first victory by decision.

The result was the same for both Moraga and Medina. Medina was entering his second-fight after losing his first, but he worked the kinks out in his training camp and came home with his first victory.

"In his first fight, he just came out so fast," Gonzales said. "It was like everything we worked on just kind of went out the window. So this time we had him spar with Monique and he calmed down a lot and the results were completely different last weekend."

Medina said it had a lot to do with the adrenaline he had going when he stepped into the ring for the first time.

"It was totally different between the two fights, the first one there was just so much adrenaline pumping," Medina said. "The way you think, the way you fight, it's just different when you're in the ring then when you're watching it or training for it. I didn't know how to control that adrenaline in my first fight. In my second fight, I controlled that adrenaline and was more controlled and had a little more pace. I felt a lot more comfortable and it actually felt really good."

Along with their success in the ring this past weekend Gonzales son, Jeese, will be making a return to the ring on March 26 at TOSO Sports Bar in Phoenix at the Ultimate Combat Fighting Challenge.

But even with the success HDH has seen in the ring, the main focus is to continue to help kids in the area who need it and anyone who is interested is welcome to come and join.

HDH is always looking for help as well as a non-profit organization. If you want to donate or are even looking to join contact Robert Gonzales at 928-300-1945.