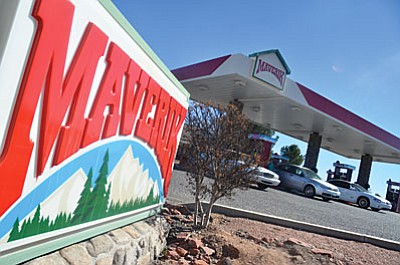 COTTONWOOD -- The Maverik Country Store is going "uptown" with its new facility on Mingus Avenue. The Cottonwood Planning Commission Monday night gave a unanimous thumbs up to expansion of the routinely crowded gas and convenience store.

The current facility stands on two parcels, but the company has always owned a full acre of three lots and recently has acquired a slice of Verde Valley Medical Center land to accommodate the expansion.

Todd Myers, representing Maverik corporate, told the Cottonwood planning board that the new building will be among the first constructed with this larger design. The building will expand from 2400 square feet presently, to 5024 square feet, more than double the size. The new construction will begin after a gap of just 15 feet to the right of the existing building, so there is no down time for the operation.

There are now three sets of gas pumps in the current layout. That will increase to 6 sets of pumps immediately, but the gas island will be laid out for a future seventh set of pumps.

But, Myers says many gas-based convenience stores expect to make 85 percent of revenue from gasoline. At Maverik, "We see the sales from the store as equally important."

In the past, a store was seen as "quick-in and out."

"Now we want people to stay longer, so we will really dress it up." He says tower racks will be full of things people want. "If is not selling, it is gone."

On one island, Meyers said, "We will be trying health food, to build up the customer base."

He says there are not as many racks in the store and more room to walk. The new store will have two large front doors plus a single side exit as well.

The restrooms will be larger and more comfortable. We want women to say, "Stop at Maverik, not stop at a gas station."

Myers said, Maverik expects to build a new store in 135 days and take 35-45 days to close an old store.

Raymond Cox said the existing facility "has been really tight. This is a real improvement, more pleasant."

Thomas Narwid questioned the lack of rubber bumpers to stop cars. Meyers said, Maverik has found that some cars go over those bumpers and crash into the store.

Plans call for steel ballard posts to prevent that problem. Cottonwood's Circle K had two separate cars crash into that store, and replaced the rubbers stops with ballards.

The board had two actions.

One was a recommendation for a conditional use permit to use the new hospital land, now zoned C-1, for a gas station, allowed only in C-2 zoning.

A design review approval considers the construction of the new store and fuel area.

The issue now goes to the city council next month for approval.