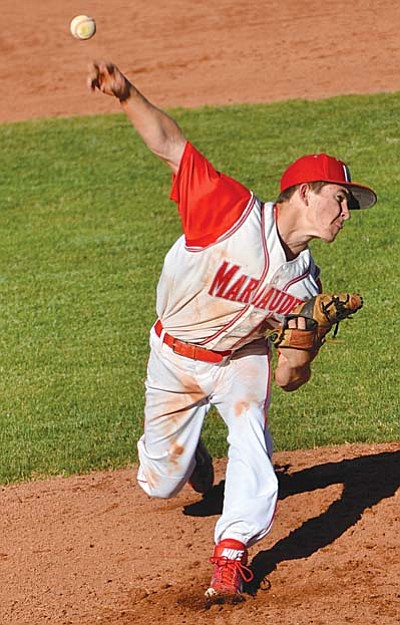 Tyler Kelly throws a pitch during their 2015 campaign. Kelly finished his freshman year with a 2.54 ERA , in eight appearances. (Photo by Vyto Starinskas)

COTTONWOOD- The Mingus Marauders ended their season last year with two straight losses in the State Tournament. The first came at the hands of the Tucson Badgers and the second was a 2-5 loss to the Sunrise Mountain Mustangs. The Marauders opened States with a 12-11 win over the Verrado Vipers.

Since that time, the Marauders have said goodbye to their two leaders in Tom McCarty and Orlando Machado. McCarty led the Marauders in hitting in 2015 with a .556 batting average, 55 hits and 43 RBI's.

Machado was the ace on the mound last year and threw a team-high 58.2 Innings while sporting a 3.10 ERA at the end of the season. He also drove in 20 runs for the Marauders last year and ended the season with a .385 batting average.

So how do you replace two seniors who had such a big impact on your line-up? Well for Mingus Head Coach Bob Young it's nothing new, finding someone new to step into that big-time player role.

"Every year we lose a couple guys that go to the next level to play college ball," Young said. "But we always have someone who steps up the next year. If someone or a couple guys step up this year to take the lead then we will keep rolling and if no one does, then we will just take a step back this year."

The Marauders will look to some of their younger players this year, as sophomore Tyler Kelly is back a year after hitting .345 and driving in 34 runs on 30 hits as a freshman. Kelly was also a regular on the mound for the Marauders, racking up 30.1 innings, holding opponents to a .252 batting average and finishing the season with a 2.54 ERA.

Heading into this year you will see Kelly returning to the mound but Young will also rely on a committee of pitchers early on in the year. That committee ranges from senior-hurler Fernando Chavez (4-0, 22 IP, .95 ERA, 6 starts) to sophomore southpaw Jordan Huey (3-0, 18.1 IP, 1.91 ERA, 4 starts).

"The two seniors will be asked to carry a lot for the staff, but we have a lot of young guys that we will rely on throughout the season," Young said. "All of them are pretty talented too, so early in the season it will be committee of pitchers. But if one or two of them standout then they will be our go to guy as the season carries on."

Young added that this year, the Marauders might rely a little more on their defensive prowess to keep teams at bay, saying their strength is definitely on the defensive side of the ball with their pitching and fielding.

The Marauders start their season on the road, not playing their first home game until March 21 when they take on the Prescott Badgers. Until then Mingus Union will take on the likes of North Canyon (March 1), Cactus (March 3), Campo Verde (March 5), Moon Valley (March 8), Barry Goldwater (March 14) and Blue Ridge (March 19). The Marauders will also play in the River Valley High School Route 66 Baseball Classic on March 10.

Young said their road trip to start off their 2016 campaign will be tough, but it will make his young team better in the long run.

"We play a lot of good teams early on, so it will be a challenge." Young said. "We might not have a good record afterwards but we will definitely get better. Generally, March is real iffy weather wise up here so we don't mind going down to Phoenix early on in the year."

As for returning to the State Tournament this year, Young said only time will tell, but if his Marauders put in the work and get better every day, they will definitely have a chance to return to that level come May.

The Marauders kick off their season on March 1 against the North Canyon Rattlers at 3:45 p.m.