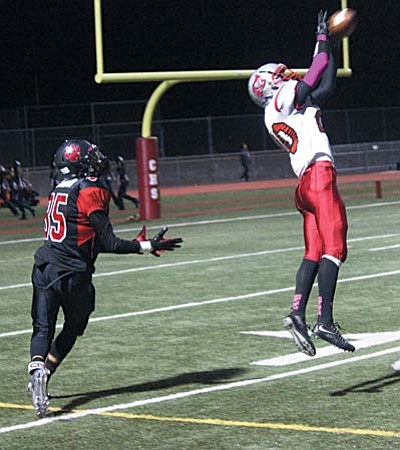 2015 brought the return of Mingus Marauders football back to the Division III State Playoff tournament.

Although their season ended early, the Marauders brought home the Division III Section VIII title. 17 players were named to the All-Section or All-Division team, Jordan Upham was named Section Player of the Year, and veteran Head Coach Bob Young was name Section Coach of the Year.

The Mingus Boys Cross Country team had a successful 2015 season with senior Joseph Sandoval won the Yavapai County Championships and then both the girls and the boys went on to place fourteenth at the State Cross Country meet.

The swim team at Mingus also had a successful season with a trip to the state meet for some of its swimmers have a successful second year under Head Coach Gretchen Wesbrock.

In Camp Verde the fall sports season was highlighted by the journey of the two soccer teams to the State Playoff tournament. Although both teams lost in the first-round, Raiven Alvey and Lucy Showers earned 2nd team All-Section honors. For the boys it was Nate Schultz was the lone All-Section honoree but sweeper David Perez earned honorable-mention honors for the Cowboys.

The Cowboys football team didn't make the State tournament, but they did have 10 players receive All-Section recognition and improved their record from a year ago and the Cowboys look to improve even further heading into the 2016 season.

The winter sports season has hit its mid-way point as both Camp Verde and Mingus Union High Schools see their winter vacation come to an end. The basketball teams have seen some exciting games come and go.

The Cowboys Girls Basketball team were able to stun Verde Valley rival Sedona Red Rock before the winter break. The Camp Verde Boys Basketball team looks to get back on track with the start of 2016 after suffering a string of losses towards the end of 2015.

The Mingus Girls basketball team ended the 2015 year with two wins and two losses at the Yvonne Johnson Memorial Shootout. The boys look to get back on track after a loss to the Moon Valley Rockets at the Talking Stick Resort Arena just before Christmas break.

The two soccer teams at Mingus have had the beginning of their seasons come and go. The boys sit with a 2-3 record with victories over Coconino and Scottsdale Christian. The girls sit at 2-3 as well with victories over rival Bradshaw Mountain and the Coconino Panthers.

The story to watch the rest of the way in 2016 will be the journey of the Camp Verde Cowboys wrestling team as they chase their fourth straight Division IV State Championship.

Returning two wrestlers with multiple individual state titles under their belt, along with a runner-up from last year, the Cowboys will look to climb the ranks of Division VI throughout the rest of the season.

The storylines of 2015 have passed and have made it a great year, will 2016 do the same in the Verde Valley?