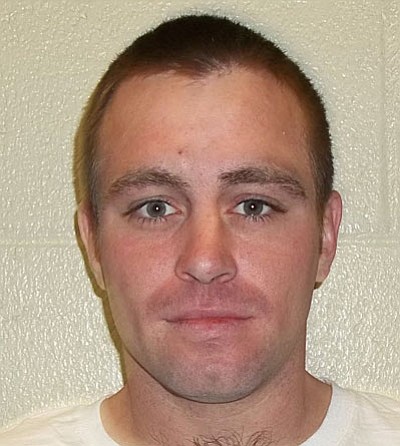 COTTONWOOD - James Daugherty, 32, was arrested for aggravated assault near Main and Mingus, after fighting with several officers sent to look for him after he allegedly assaulted a woman during a domestic violence incident in Clarkdale Saturday, according to the Cottonwood Police Dept.

Police were advised Daugherty was at a local business and was also known to have an outstanding felony warrant issued by Yavapai County Superior Court. Earlier in the week, Daugherty had run from Cottonwood Police when officers attempted make a warrant arrest.

Officers entered the business where they were told Daugherty was located and found him in an "employee only" area. When confronted, Daugherty ran toward the officers trying to push them out of the way in order to get out of the room and escape the building.

Officers tried to restrain Daugherty, but were not successful, according to the news release from Cottonwood PD. He broke loose from their holds and ran into the parking lot where he was again confronted. While attempting to restrain Daugherty, he continued to fight officers, and at one point, pulled off one officer's portable radio, badge, and body camera. When officers were not able to get Daugherty to stop resisting, a Taser was used to successfully stop his aggression toward officers.

Daugherty was transported to the YCSO Jail where he was charged with three counts of felony aggravated assault, three counts of resisting arrest, two counts of criminal damage, and his failure to appear warrant.

Charges are still pending from the Clarkdale domestic violence investigation.