Lawmaker believes a well-armed college campus is a safer one 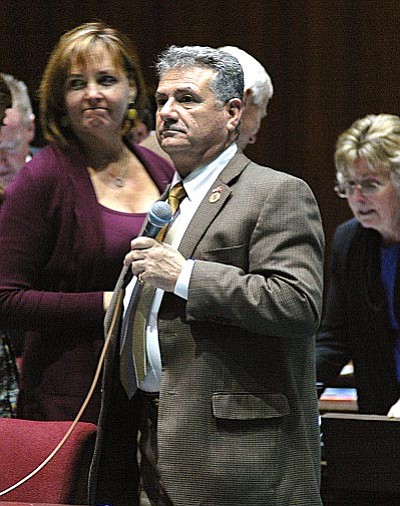 PHOENIX -- A veteran state lawmaker is moving to allow some people to be armed with everything from guns and knives to baseball bats and chemical Mace on college and university campuses.

Rep. Sonny Borrelli, R-Lake Havasu City, said the current ban essentially leaves faculty and students at the mercy of anyone who ignores the law and decides to start shooting. He said that's not right.

But Borrelli, recognizing the political controversy that has killed prior proposals, told Capitol Media Services he's willing to make some major concessions. One would be requiring those who want to carry to first tell university and community college administrators.

Potentially more significant, he would require more than just completing the current state requirements to carry a concealed weapon, a requirement he conceded has been diluted over the years. Borrelli said those who want the right to defend themselves on campus would have to undergo additional school-approved training, including specifically what to do -- and not do -- in "active shooter' situations.

He acknowledged that may draw opposition from gun-rights groups who have argued for years that all adults deserve the unrestricted right of self defense.

But Borrelli said the change might blunt the opposition that has come from university police departments. And it might even help avoid a gubernatorial veto.

Whether the changes will make the measure more acceptable to universities remains unknown.

The University of Arizona police department referred calls to the Board of Regents. And a board spokeswoman said the panel is set to review the measure next month.

There are some exceptions for public buildings. And state law allows colleges and universities to set their own rules.

HB 2170 would overrule any such regulations for faculty members and students who possess a valid state permit to carry a concealed weapon.

Similar efforts have been pushed for more than a decade. And in 2011 one made it all the way through the process, only to be vetoed by Gov. Jan Brewer.

Borrelli said the goal of such laws remains valid. He also said this is about more than guns, citing university regulations which also ban knives, chemical sprays and similar items.

"If a student is attacked and they use any weapon of any sort, a knife, to defend themselves and thwart off an attacker, if they report it they could be expelled and possibly prosecuted,' Borrelli said. And that's not even mentioning the kind of attacks that have occurred on college campuses across the nation.

"You should go to school and not have to worry about somebody coming in, some nut, wanting to have a shooting on campus,' he said.

"The police cannot be everywhere,' Borrelli continued. "Just to have a blue light every so many feet (at an emergency phone) is not necessarily going to keep you safe.'

Borrelli said, though, he does not mean campuses should be wide open to weapons.

Under Arizona law, any adult can carry a weapon, in the open or concealed.

The state also issues concealed-carry permits to those who undergo certain training and pass a background check. Those permits give holders some additional rights, such as the ability to bring a gun into a place where alcohol is served, though they are not supposed to drink.

But the legal requirement to prove competence to get a permit can be obtained through various paths, ranging from proof of prior military service to any hunter safety course approved by the Arizona Game and Fish Department.

Borrelli said more should be required before bringing a gun onto campus than knowing how to fire a gun. It's knowing when not to use it in given situations.

"If there's a shooting in the hallway you barricade yourself in,' he said, even given the legal right of self defense.

"You can't just arbitrarily go shooting people,' Borrelli said. "You don't have the right to leave the classroom and go out into the hallway and play Harry Hero, because then you're going to become part of the problem rather than the solution.'

That goes to one problem cited by university police officers in opposing prior measures: In responding to a report of someone with a gun, they don't want to enter an area and find a half-dozen people with weapons, leaving them to wonder who's the "bad guy.'

Borrelli said that's why he wants to require those who want to carry a weapon onto campus to first notify college or university officials.

"Then you can go through 'active shooter' scenario protocols,' he said, informing those with permission to carry exactly the procedures they should follow, especially when police enter the room.

"You shouldn't be standing up playing Clint Eastwood in the middle of the classroom,' Borrelli said. "You hit the ground and push that weapon away from you.'

That law allows each school to determine certain "sensitive areas and buildings' where weapons would continue to be prohibited. That is determined by each institution with input from students, faculty and staff, with a two-thirds vote of the Board of Regents for approval.