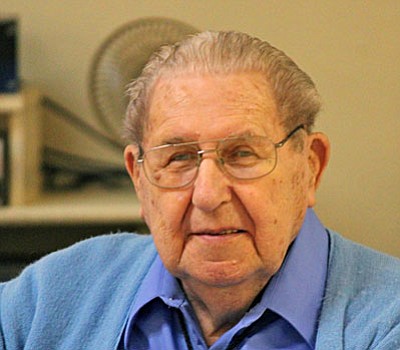 Beloved husband, father, grandfather and World War II veteran who flew B-24 combat missions in the European Theater of Operations, died on January 13, 2016.

He was born to John and Helen Gorman on September 18, 1922, in North Adams, Massachusetts.

He grew up in Rochester, New York, and after the war he was employed by Singer Sewing Machine Company and Crouse-Hinds electrical manufacturing.

He was Scoutmaster of Boy Scout Troop 78 in Liverpool for several years.

He and his wife of 67 years Evelyn relocated to Phoenix, Arizona from Liverpool, New York in 1971. He went to work for AMFAC Electrical Distributing and retired from there in 1988.

An accomplished photographer, he particularly enjoyed family gatherings where he was known for his portraits. He was also active in animal rights groups in Phoenix.

In 2007, he and Evelyn moved to Sedona, Arizona to be closer to their son.

Besides his wife, he is survived by son David and daughter-in law Charlotte from Sedona, Arizona; granddaughter Stephanie of Sedona; Nephews William, John, and Michael Cusack of New Jersey; Timothy Gorman of Georgia; and James Gorman of North Carolina.

He was preceded in death by his parents, brother Francis Gorman, and sister Florence Cusack. Warren was loved by all who met him and will be greatly missed. He will be entombed at Saint Francis cemetery 2033 North 48th Street, Phoenix, where a memorial service with full military honors will be conducted on Tuesday, January 19, 2016 at 1:45 PM.