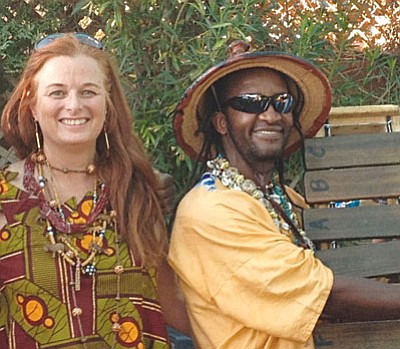 The weekly Living Room concerts take place at the Center for Positive Living, 45 Castle Rock Road, in the Village of Oak Creek.

Weaving traditional music, storytelling, Baba Vusi Shibambo will be joined by talented Arizona drummer Connie Avery. Together, they will take you on a journey of entrainment that "begins in your toes and moves deep into your heart." The sound and rhythm of African drumming is a primal event. It is a shared expression that many ethno-musicologists recount as being at the center of our collective consciousness, as the branches of the human tree trace back to the African continent.

Born in South Africa, Bab is one of the Shangaan people. Shimbambo translates into English as "guardian of the skins." Keepers of the Rhythms and the Royal Shimbambo family ancestors were esteemed for their vital position in the community as caretakers of the tribe's animal skins for clothing and drums.

Shimbambo dreamed of continuing in the family drum tradition, which he now passes on to his son Manqhoba, "The Victor."

His goal of preserving the music for present and future generations has culminated in his new CD African Skies on Skin, which commemorates the 10th anniversary of the first democratic elections in South Africa and celebrates the children of South Africa who stood up against the apartheid regime in 1976.

Connie Avery is an outstanding drummer who joins Shimbabo for a concert that everyone will enjoy thoroughly. Vusi and Connie's concert will feature traditional South African rhythms, songs and stories from the Motherland as well as a performance with audience participation on percussion instruments towards the end of the night.

Founder of the In the Living Room music series, Shondra Jepperson commented, "Vusi and Connie are a must-see. Whether you've already seen them in concert or not, they always deliver a fabulous one of a kind performance great for all ages."

Shondra continued, "Another thing that's really cool is, Vusi and Connie will be bringing extra drums for everyone to participate in drumming with them toward the end of their concert so this is going to be really fun for everyone!"

Next Wednesday, Feb. 3, Ryan Biter will perform In the Living Room for the first time. Biter is an eclectic singer-songwriter from Flagstaff with a soulful voice and a large catalogue of original music.

A musician since the third grade, Biter began in band with the saxophone. In high school, he picked up the guitar and has not been able to put it down since. He has been influenced by musicians like Paul Simon, Martin Sexton, Michael Hedges, James Taylor, and is also strongly influenced by the desire for the guitar to be more than mere accompaniment.

Biter's guitar playing is both lyrical and percussive, adding elegant texture to his music. His voice is smooth and soulful, yet versatile enough to be at home in a variety of styles. His voice has a palpable sincerity and passion that draws you in song after song.

Biter just released his first album entitled "Under After Avenue," an homage to his eclectic style. It includes everything from sweet waltz to funky, breezy pop; socially conscious jazz throwbacks to brooding modern blues, all along taking you on a journey through the crossroads of life.