Life in the Slow Lane: Help! Timmy's in the Well! 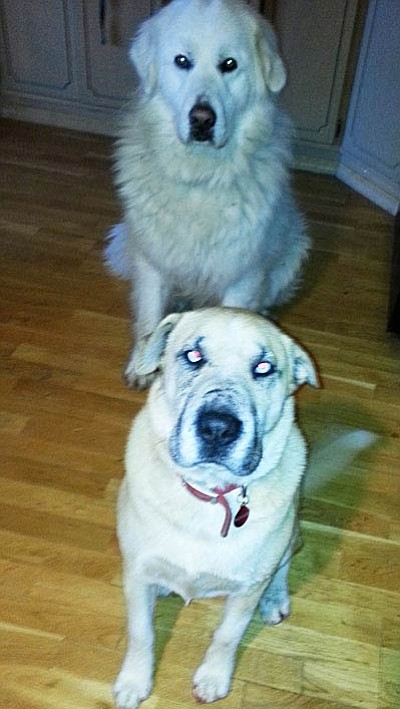 Moosie's wounds don't show up well against all the dots on his nose.

My internet has been up and down so many times lately that I'm beginning to feel a little off. You know, that jerky weird way you feel when you decide you to give up sugar. My whole system gets antsy if I can't check spelling by typing a word into Google. Seriously! Cross the room to pick up the dictionary? I don't think so.

So, it started at 4:30 AM or so yesterday. Bear barked THAT bark, the one that says things aren't going well outside. The Mason Ditch is off at the moment. The Mason Ditch is Blue Line #2 that runs through my property and, although it does send water through my property, I can't use any of the H2O. Blue Line #1 is Page Springs, which is my water source and I can use as much of it as I want or can contain. Blue Line

#3 is Oak Creek which is Oak Creek and lovely to look at. For the record, the Mason Ditch is actually also Oak Creek. The water is diverted from the creek some 5 miles or so upstream from here. The channel takes it past my house and onward to where it can be used a few miles south of here. Just like Page Springs, the Mason Ditch channel has to be maintained and apparently something somewhere has gone awry so the water is off while the new hole gets plugged.

The point is that when the water is off, the natural barrier it creates goes off with it. Moosie has more than once made his way off property by trotting under a bridge that he usually can't get under without mask, fins and snorkel. Bear doesn't go under the bridges. The last time he got near one there was live electric tape just above the water level.

He didn't stop yelping until he reached the safety of the porch.

So by 4:45 AM I was in my jammies and robe, standing at the kitchen door. There was no sign of Bear although I'd just heard him barking on the porch. I hesitated, whining to myself that I didn't really need to go looking for a dog on Walkabout in the cold and dark. I almost had myself convinced that I'd dreamed the whole thing when I turned the lock, intending to stick my head out the door to see what I could see.

Bear was there in an instant. His tail was in full curl (when he's excited his tail curls into itself like a Chow) and his ears, which are as lazy as he, were upright. It makes him look like a huge white husky or at least like a dog with some ambition. He danced back and forth, moving nervously from paw to paw. Turning, he raced to the porch railing, barked that worried bark again, then raced back to look at me.

The translation was obvious for anyone who speaks Lassie: "Timmy's fallen in the well and you must come save him!" Or in Bear's case, I think it was: "The Little Guy is in trouble! You need to save him because this is way too scary for me. That's why I'm on the porch and not with him."

Now worried, because Moosie's instincts don't let him back down from a fight and coyotes can walk under the same bridge he can, I grabbed my coat. Shoving my bare feet into a pair of manure-encrusted shoes, I put on my headlamp and trucked out into a chilly but beautiful star-lit night. There was no sound of coyotes tearing into anything or javelina squealing or the stench of a skunk giving up its life to Moosie's lion-worthy Sharpei jaws.

Bear, who usually moves like a sloth except when he's playing with Moosie or the word "treat" is involved, actually ran ahead of me. When he turned and saw I wasn't keeping up, he raced back to encourage me to move faster. He stopped near the larger of the rolling chicken coops and aimed his gaze across the damp ditch channel at the thick, four-foot-tall blackberries that line the bank. There was no growling, squealing or yipping. The chickens in the coop were quiet and there was nary a gobble from Tom roosting with his girls in their nearby coop.

Usually, if there's something going on outside their space the birds make noise.

My heart fell. The coyotes had already been and gone, and left Moosie for dead in the blackberries. If he was in there and hurt, I'd never find him in the painful and prickly dark.

Just in case, I whistled. The blackberries rustled. Crawling on his belly, Moosie slithered out of the brambles and into the ditch, then popped to his feet to prance happily over to me. Like Bear, his ears were perked and his tail curled in excitement. Unlike Bear, his nose was bleeding in at least two dozen places.

I breathed in relief and aimed my head upward. As the headlamp played across the top of the trees that tower over where Moosie had just been, a pair of eyes glowed orange. In another tree was a second pair of orange orbs. Two raccoons, perched at the top of two different trees.

Coyotes, javelina, bobcats and Moosie aren't the only ones who turn the empty ditch into a buffet, moving themselves from salad to entree to dessert.

I didn't have a rifle handy yesterday morning. If I had, I still probably wouldn't have attempted to end what Moosie started, not at four in the morning. First, I'm pretty certain I wouldn't be able to hit the broadside of a barn and, second, I'm sure no one living near me would want to be awakened by my attempts to hit something much smaller than a barn. Instead, I grabbed Moosie by the collar and took him into the house. Bear followed and while I washed Moosie's muzzle and treated his wounds (today, his nose is twice its usual bulbous size), Bear helped by cleaning up all the cat food. Then he went back out into the cold where he's much more comfortable (the Kuvasz is "almost impervious to inclement weather"), content to know he had for one shining instant been Lassie.