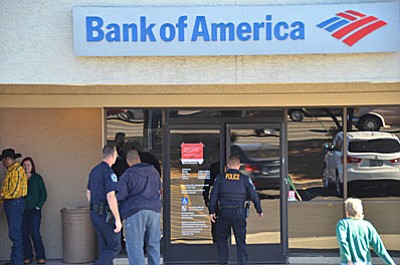 Cottonwood police as well as the Yavapai County Sheriff’s Office and the FBI are investigating the theft. (VVN/Vyto Starinskas)

COTTONWOOD -- A substantial theft of money has been reported by the Cottonwood branch of the Bank of America before dawn Wednesday.

Cottonwood Police Spokesman/Detective Tod Moore said one or two people entered the bank branch overnight through the back door to the building.

There was no forced entry, he said.

Moore said alarms called police to the bank branch twice. The first alarm brought police to the Bank of America branch at 1 a.m. The second alarm was at 4 a.m.

Both times, said Moore, police "found the bank secured and nothing suspicious was observed."

Cottonwood police as well as the Yavapai County Sheriff's Office and the FBI are investigating the theft. Moore said, "The case is still very fluid."

Moore said there are no suspects identified at this time, though police are looking for a couple of "persons of interest."

An undisclosed amount of money, which Moore described as a "large sum," was stolen.

No suspect vehicles have been identified.