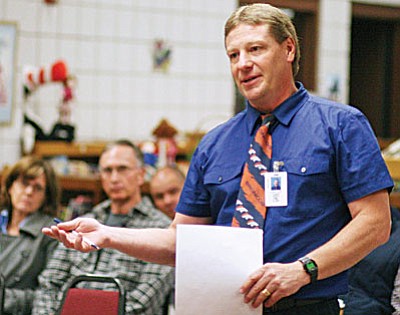 Weir, who has been released from his contract at Camp Verde high after 24 years, said he is "excited for the opportunity to do something I've wanted to try to improve."

"I thought I'd retire there," Weir said. "I have a great staff. And I pray that it's going to continue."

Once Weir made his decision to accept the contract, he called a few people personally - then sent out an official email.

As both principal and the school's career and technology education director, Weir "has a deep passion for [career and technical education] programs and I am excited to see him bring that passion to VACTE, and all the new opportunities that will arise for our kids," said Dennis Goodwin, Camp Verde Unified School District superintendent.

After former superintendent Lisa Aragon announced she was leaving the career and technology education program to be closer to her mother in Wyoming, the VACTE board agreed to have Dockray enter into negotiations with two other candidates, one being Weir, who had been a finalist for the position that went to Aragon.

"The board was leaning toward Bob," VACTE board president Steve Dockray said. "That's where I started. He and I met - and we came to terms. Then [June 28], I took it to the board. We discussed the terms, then we offered him the contract."

Wednesday, Aragon spent three hours with Weir, "getting him up to speed on the things I had been working on and giving him contact information for people he will need to be in touch with."

Said Aragon, Weir "is a good choice and he is going to do a great job for VACTE."

Besides his Verde Valley roots, Weir has a "passion for CTE," Dockray said.

According to Weir, the Verde Valley has "a lot of untapped resources."

"The Verde Valley is the greatest place in the state of Arizona," Weir said. "And we see the future really bright for Valley Academy. I'm excited for that.