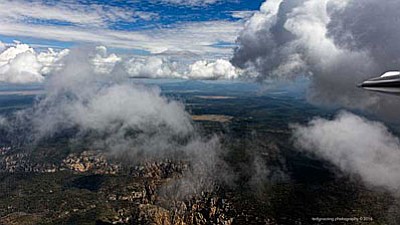 Before the storm: I got a rather late start this morning and it was about 9 a.m. before I took off ... got some more great video with the GoPro and will work on that this weekend and put another and better polished video up.

The sky was starting to OD to the NE when I took off and another terrific cumulous nimbus cloud was developing to the SW behind Mingus so I was not expecting a long flight. By the time I got up past Munds Park there was lightning about ten miles to the NE and more to the SW. The clouds were developing quickly around me and base was only about 10,000'. And I was about 11,000' when I took this shot looking to the WNW from an area near over West Fork Canyon. Sitgreaves Mountain is just above center photograph . left the wing tip in the right side of the image and it adds a little reality to the shot.

Shortly after I took this shot, the CuNim over Mingus had totally over developed and had an anvil top and it was blowing out. So with that one overdeveloping and more to the N and NE doing the same a prudent decision was made to land and fly another day.

Last year I had special caps made for my wing tanks to accept a GoPro, but the job that was done was such that it would not work, so a friend in Cottonwood is going to modify them to work, heading down there Thursday and then install them on Mariah. They are pretty neat in that you can remote control them from your cell phone whilst flying. Eventually the plan is to mount them, one pointing forward and one down the top of the wing so I can get cool shots looking down the wing which will be great for flying along cliff faces or in steep turns. Need to keep one in the cockpit too. Might get to try it this coming weekend.

Have a beautiful day and keep breathing.

Give me to gladly go

My way and say

No word of mine own woe;

But let me smile each day