"He was who we thought he was" 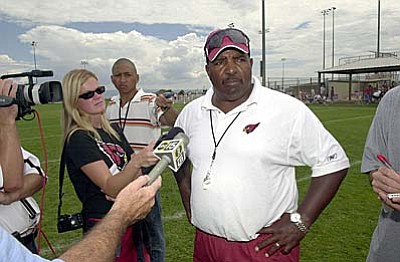 In this Aug. 6, 2005, file photo, former Arizona Cardinals head coach Dennis Green talks to the media after a no-pads scrimmage during training camp at Pioneer Park in Prescott. Green died of a heart attack Friday. He was 67.(File Photo courtesy of The Daily Courier)

Former Arizona Cardinals coach Dennis Green, is probably best known for his rant: "They were who we thought they were, and we let them off the hook," Green angrily shouted, hitting the podium at his after game press conference. Green, was angry after his Cardinals blew a 20-0 halftime lead against the Chicago Bears in 2006. Green died from complications of cardiac arrest late Thursday night. He was 67.

"All of us at the Cardinals are incredibly saddened by the news of Dennis Green's passing," Cardinals President Michael Bidwill said in a statement to the press Friday afternoon. "Coach Green will right be remembered as a true innovator, leader and pioneer among football coaches. We express our deepest sympathy to his family and many friends."

Green didn't have the success with Arizona (16-32) in three seasons (2004-06) as he had with the Minnesota Vikings. Green was an assistant coach under San Francisco 49ers coach Bill Walsh. It's where he learned the sophisticated "West Coast Offense" which featured quick short passes instead of running the football. Green used this offense to perfection in Minnesota, drafting Randy Moss to unleash a deep threat on the NFL.

His best season in the NFL came in 1998, as the Vikings set an NFL record in scoring offense with 556 points. The Vikings finished the year with a 15-1 record before losing to the Atlanta Falcons 30-27 in overtime, in the NFC championship game.

Green coached the Vikings from 1992-2001, and compiled a (97- 62) record making him the Vikings' second winningest Head Coach behind Bud Grant.

His overall record was 113-94 in 13 seasons of coaching. He led the Vikings to the payoffs in eight of his 10 seasons as the Head Coach.

"We are incredibly saddened by the sudden passing of former Vikings Head Coach Dennis Green," the Vikings said in a statement to the press Friday afternoon. "Denny made his mark in ways far beyond being an outstanding football coach. He mentored countless players and served as a father figure for the men he coached."

Green's impact on the NFL is still being felt. He was the second African-American head coach in the modern era of the NFL, behind Art Shell (1989). His success as a Head Coach led to other African-Americans becoming head coaches in the NFL: Herm Edwards, Lovie Smith, Mike Tomlin, Ray Rhodes, Marvin Lewis, Tony Dungy, Romeo Crennel, Jim Caldwell, Raheem Morris, Mike Singletary, and Terry Robiskie.

Green found success on the collegiate level coaching at Northwestern (1981-85) and Stanford (1989-91) before moving on to the pros.