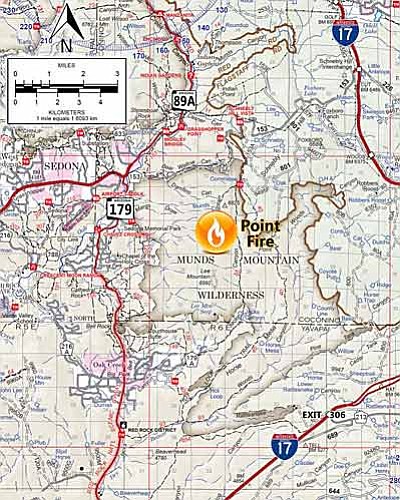 SEDONA - The lightning-caused Point Wildfire is currently burning in Munds Mountain Wilderness on Munds mesa, which is located east of State Highway 179 and south of Sedona and Schnebly Hill road, about 2.5 miles east/southeast of Sedona.

The fire that began July 20 is estimated at 190 acres and was ignited following several lightning storms that came through the area mid-week.

"Today we are focusing on stopping the northern progression of the wildfire," Nicole Branton, Red Rock District ranger, said Sunday. "This fire is in very difficult terrain that is dangerous to firefighting personnel, so we can expect to see smoke over the next several days as it continues to burn in areas that firefighters cannot access. Firefighter safety is our primary concern along with containing the fire on top of the mesa to prevent further spread into surrounding canyons."

Smoke will also be visible from various parts of the Verde Valley and along Interstate 17 while firefighters work to contain the fire over the next few days.

Air attack helicopters and planes along with 55 firefighters are working to help slow progress across the mesa and to reduce its chance of moving into side canyons.

For public and fire fighter safety, the public is asked to acknowledge the closure area of Munds Mountain Trail and Jack Canyon trail are closed.

Drones cannot be flown over or near the fire, as doing so will cease operations that are fighting the fire with water drops from the air.

TUSAYAN -- On July 22, the Coco Fire ignited due to lightning 6 miles southeast of Tusayan near the junction of Forest Road 302 and 2719. The initial start of the fire covered 15 acres and has now grown to 25 acres by moving through the grass and pine litter. There was very minimal smoke production yesterday and no reported impacts to the east rim drive or the town of Tusayan overnight.

WILLIAMS -- Fire officials on the Williams Ranger District of the Kaibab National Forest have two new lightning caused fires called the "Sunflower" and "Ike" fires. Both fires are being assessed for their potential of reducing hazardous fuel accumulations and restoring overall forest health.

The Sunflower fire was discovered on July 20th, and has grown to approximately 11 acres in size. It is located near Sunflower Flat west of White Horse Lake close to the junction of forest roads 747 and 14. The Ike fire, also discovered on July 20, is approximately 1.5 miles to the southeast of the Sunflower fire and is currently less than one acre in size. Both fires are burning in a ponderosa pine fuel type mixed with oak and grasses and have the potential to grow over the next several days as a warmer drying weather pattern is forecasted.

As these fires develop and expand in size, an emergency closure order may be implemented in the immediate effected areas and on a short section of the Overland Trail to ensure public and firefighter safety.