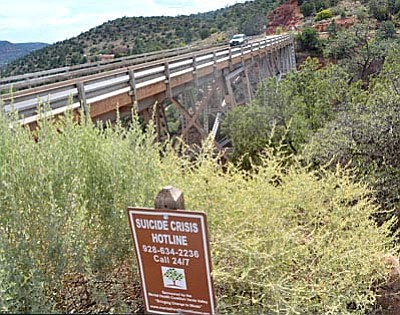 The number of suicides at Midgley Bridge during the year 2015 was four in three months, equaling the number of fatalities over the previous four years combined, according to Coconino Sheriff Office data. While total suicides at the bridge this year remain at one, 11 people have jumped to their death from the bridge over the past decade. (VVN/Vyto Starinskas)

SEDONA - In response to a total of five people jumping to their death from Midgley Bridge this year and last, Sedona City Council during a July 26 meeting voted unanimously to approve design plans for a suicide prevention barrier.

City government approached the Arizona Department of Transportation (ADOT) in February this year requesting that a barrier be installed on the steel truss bridge located about one and one-half miles north of downtown Sedona. By April, ADOT had agreed to design and install a physical barrier to impede people from jumping off the bridge and down into rock-strewn Wilson Canyon some 350-feet below.

Proposed is a 10-foot high fence to be installed on both sides of the 250-foot bridge, which is owned by the state. Due to overlapping jurisdictions at the site - - along with the fact that the 77-year-old bridge is listed on the National Registry of Historic Places - - the project will require a number of reviews prior to completion.

The number of suicides at Midgley Bridge during the year 2015 was four in three months, equaling the number of fatalities over the previous four years combined, according to Coconino Sheriff Office data. While total suicides at the bridge this year remain at one, 11 people have jumped to their death from the bridge over the past decade. The total does not include unsuccessful attempts, as occurred Sept. 16 last year when police pulled to safety a 34-year-old man dangling from the railing.

ADOT representative Jesse Gutierrez, deputy engineer, said, "We looked at the statistics and they are very alarming. The mayor and fire district sent us this letter and our director decided this was something that needed to be done fairly quickly."

Gutierrez provided an artist's rendering of the proposed design for council's consideration.

"Given the historical nature of the bridge, the fence is integral to the history of the bridge and a lot of thought needs to go into to it to make it right," said Gutierrez. "The mesh is not standard chain link. You can't climb on it. The forest service requested we color it their standard brown to blend in to the surroundings."

According to Gutierrez, the project is planned to take place after Labor Day and will take 10 days to complete. One lane on SR 89A would need to be closed for 5 days in each direction, for a total of 10 days.

"When we get closer, we will select a time that is less disruptive to the local community and traffic patterns. We certainly don't want to do a closure if festivals are going on," Gutierrez said.

In response to the notoriety of Midgley Bridge as a site for suicides, signs displaying a Suicide Crisis Hotline telephone number were installed at the bridge and parking lot by the Sedona/Verde Valley Mental Health Association on Sept. 10, Suicide Prevention Day. While it is unknown how many suicides the signs may have prevented, six days after installation a man was pulled off the bridge railing by police.

Suicide prevention barriers are not unique to Midgley Bridge. Similar barriers were installed on the Prince Edward Viaduct bridge in Toronto in 2003 after 492 people had jumped to their death, making it the third deadliest bridge in the world. A study seven years later found that, while the barrier prevented suicides from that particular bridge, it had no effect on overall jumping deaths in the area, according to Modern Medicine.

Midgley Bridge is prominently displayed on the City of Sedona logo.