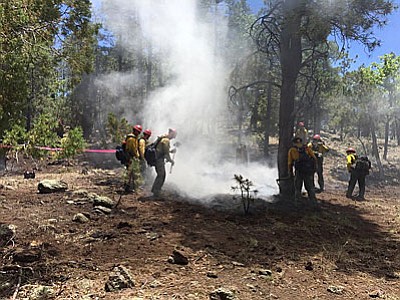 JEROME - A wildfire was spotted by Prescott National Forest rangers off Forest Road 106 mid-morning Monday but was quickly brought under control.

The fire, which reached just one-tenth of an acre, was at the top of Mingus Mountain, past the group camping area and the hang glider launch area, USFS spokeswoman Adriane Reagan said.

Jerome wildfire trucks as well as Forest Service Fire crews were dispatched from as far away as Flagstaff to help control the blaze and the resources they poured on the fire got it controlled by around noon.

Reagan said the cause is undetermined, but added that there had been "a lot of abandoned campfires this weekend, so that seems to be a lingering issue."

She said the Forest Service urges the same thing as it does every year: "Don't ever leave your fire ... you've got to make sure that fire is out before leaving your campsite."