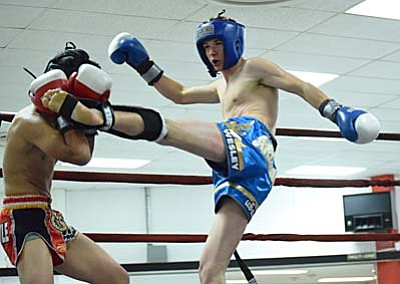 Wesley Loveall (right) throws a kick to the head of Fight Ready’s An Ho. Loveall won Saturday night in his debut fight. (Photo by Greg Macafee/VVN)

PHOENIX - Saturday night brought 10 Verde Valley fighters to Cortez High School in Phoenix for another installment of the Ultimate Combat Fighting Challenge. Two of those fighters, Manuel Robinson of Dragon's Eye and Ezequiel Casillas of Golden Cobra squared off for a Regional Title in a battle that went all five two-minute rounds.

Casillas and Robinson squared off in the first title match of three on the fight card Saturday, and they put on quite the show. The two Verde Valley natives exchanged blows throughout all five rounds, both taking control of the bout at different times, Casillas with punches while Robinson threw ferocious kicks that kept Casillas at length.

As the fifth round ended both fighters showed signs of fatigue as they hit their corners to wait the judges' decision to see who would walk home with the hardware wrapped around their waist. The judges' decision came in and as his name was announced, the 135-pounder from Dragon's Eye gym dropped down to his knees and took home the title.

Before the two faced off in a battle for the title eight other Verde Valley fighters squared off in the ring with opponents from around the state of Arizona.

Jase Brisceno of Dragon's Eye got the night started for the Verde Valley fighters with an expo bout against Armando Lucio of Tax boxing. The fight went three one-minute rounds and both fighters got their hands raised at the end.

Angel Gonzalez of Dragon's Eye and Silas Diaz of 2 Knuckle were the next fighters to take the ring and provided a great show for the fans in attendance. Both fighters showed off the ability to dodge punches along with being able to throw them as well. Gonzalez caught Diaz with a spinning back fist in the second-round that caused the 165-pounder to stumble back somewhat, but it was Diaz who controlled the bout and came away with the victory.

Gonzalez's teammate, Brandon Verdugo, was the next to take the ring as he took on Michael Mowrey of RBR in a bout that went all three one-minute rounds. Mowrey came out strong with a flurry of punches in the first round that helped him maintain control. But as the fight went on Verdugo took control of the fight in the final two rounds. In a decision that left some in the crowd scratching their heads, Mowrey went home with the victory as he celebrated his first bout in the ring.

Jensia Gonzalez of Clifford Larson's Gym made her ring debut Saturday evening as she took on Ginger Woods, who sported a 2-0 record heading into the contest. Woods defended her undefeated record against Gonzalez but not without a challenge as Gonzalez went all three rounds, showing signs of strength at time, landing punches throughout the match.

Camp Verde three-time wrestling State Champion Alex Casillas represented the Verde Valley next in just his second time in the ring. Casillas was matched against a somewhat taller opponent in Drew Porcillo of KO Fitness, both fighters brought a 0-1 record into the match. Both Casillas and Porcillo controlled the match at times, keeping their opponent at length while throwing a flurry of punches when needed. Porcillo took home the bout after the bell rang at the end of the third round.

In the 11th bout of the night, Wesley Loveall of Clifford Larson's gym took the ring for the very first time against An Ho of Fight Ready who sported an undefeated record heading into the match. The two were matched up after both of their opponents backed out at the last minute.

Some considered it one of the best matches of the night as the two exchanged blows for three two-minute rounds. Loveall used his length to keep Ho at a distance, throwing kicks to the ribs, head and legs of his shorter opponent. He controlled the whole match, not backing down from the more experienced fighter who bested Ezequiel Casillas close to three months ago.

As the winner was announced, Loveall's hand was raised as he earned his first victory inside the ring with an exceptional display of skill.

Joe Gomez of Dragon's Eye was the final Verde Valley fighter to take the ring as he took on Jose Riveria of Fight Ready in a three one-minute round fight.

It was another great night of fights and as the summer starts all three gyms plan to attend national tournaments across the country, including Iowa and Orlando later this summer.