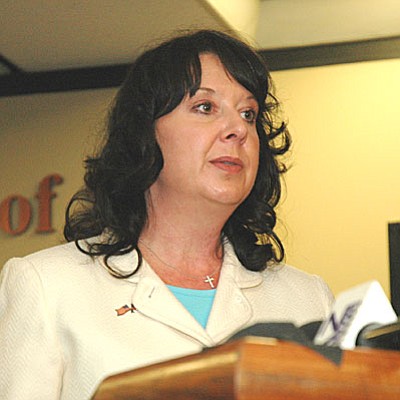 The latest stems from the failure of her office -- she admits intentionally -- to issue a new election manual this year for county officials to follow. That manual covers everything from who is qualified to vote and campaign finance reporting by candidates to the technicalities of how to deal with problems at the polling place on election day.

Reagan spokesman Matt Roberts said his boss, who took office in January 2015, has been too busy to update the nearly 400-page manual, what with a presidential primary, a special election, a regular primary and the general election this year.

Anyway, Roberts said his boss reads the law to require only that "there be an election procedures manual in place before each election, not a new or revised manual.' And he said the 2014 manual, adopted by Ken Bennett, Reagan's predecessor, "remains in place with full legal effect.'

But Chandler attorney Tom Ryan said that's not what the law says.

"The statute says 'shall be' issued prior to each election,' Ryan wrote in his complaint to Attorney General Mark Brnovich.

Ryan said Reagan could conceivably conclude that the 2014 manual is just fine and "slap a new cover page on it.'

But he pointed out that election laws have changed since the manual was last updated, citing for example the new prohibition against "ballot harvesting,' taking the early ballot of another voter to the polls. Yet there is no mention in the existing manual of what an election official is supposed to do if someone shows up with more than one ballot.

Roberts, however, said none of that requires a change in the manual. He said ballot harvesting is a criminal offense versus an election law violation.

Anyway, Roberts said, Reagan does not believe every change in election laws requires an update of the manual. He said his boss prefers to wait until next year to do a total rewrite.

An aide to Brnovich had no comment on Ryan's request. But Ryan does have a record of being able to get the attorney general's attention.

It was Ryan who got Brnovich to take a closer look at the failure of Reagan's office to mail out more than 200,000 brochures ahead of the May 17 special election with arguments for and against the two measures on the ballot. Brnovich has since appointed a special investigator to find out if any laws were broken and whether civil or criminal charges should be filed against Reagan.

Reagan also was named in a civil lawsuit following problems with the March presidential preference election when voters in Maricopa County stood in line for up to five hours because of the dearth of polling places. While Reagan has insisted she had no legal responsibility for that, attorneys for the plaintiffs cite section of election law they say undermine that.

There also are reasons to question her current claim she is not required to update the manual.

Bennett, who was secretary of state from 2009 to 2014, said he did three separate updates in that time ahead of each election, saying that's the way he read the law.

He acknowledged that the secretary of state can be busy during election years. But Bennett said that's why he and his staff did the rewrites in odd-numbered years, working with not only county and city officials but also outside groups like the League of Women Voters to ensure that the manual was up to date and all potential problems were addressed.

"We were always finding upgrades or improvements, or changes required by court cases or law changes,' he said. "We always were submitting a new version.'

Bennett said he never found a time where a prior manual was sufficiently updated to allow it to be used for a new election cycle. And even if there had been such a situation, Bennett said he still would have needed to follow the rest of what the law requires: submitting the manual to both the attorney general and the governor for their approval.

That goes to Ryan's point about what's in the manual being more than simply what Reagan decides is appropriate and good enough.