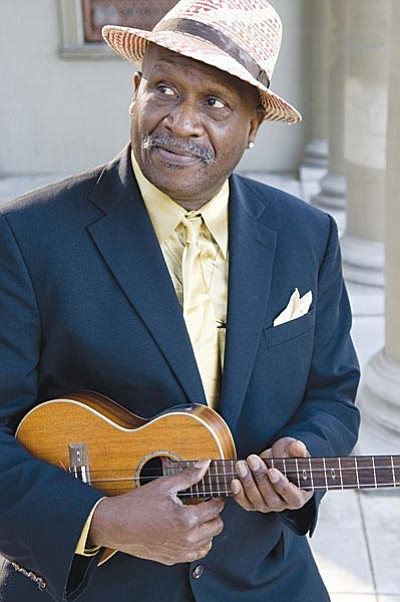 Grammy-Award winning blues legend Taj Mahal is headlining the 3rd Annual Tilted Earth Festival on June 18th sponsored by Page Spring Cellars and the City of Cottonwood. Mahal will be presented with two special honors at the festival. Mahal is receiving a Laffathon Lifetime Achievement Award and Mayor Joens and the City of Cottonwood is presenting him the proclamation that declares June 18th Taj Mahal Happy Blues Day to recognize and share Mahal's positivity.

Eric Glomski, who is the founder of Page Springs Cellars, explained that their small music committee (Luke Bernard, Hezekiah Allen and Glomski) all excitedly agreed that Taj would be the perfect classic veteran for this year's festival. Glomski shared, "The first time I saw Taj was when I went to Prescott College in the late 80's...he played at the mine in Jerome." Glomski added, "He's not just what I would call a blues musician. He brings this kind of island, this Caribbean influence, this kind of, I wouldn't call it reggae, I wouldn't call it calypso, you know what I'm talking about? There is this certain amount of joy in his music that comes from those island cultures and then he blends it with the blues. To me he's broader or more expansive that somebody like B.B. King or Buddy Guy."

I couldn't agree more. I met Taj on Kauai in 1988 and have had the pleasure to watch him blossom even more. Mahal's music has a broad appeal worldwide. Perhaps it is also because he is a man of great heart and soul. He is also a man of high intelligence, compassion and humor. Anytime I have a conversation with Taj, I walk away impressed with more inspiration.

Q: The last time you performed in the Verde Valley was at the Magic Mountain Music Festival in1989 in Jerome. Now some 27 years later your loyal fans are still wild about ya plus you also have a whole new generation of young people listening to your music too. Your music is cross-generational, that is special and rare. You must be delighted to see the endurance of your music.

TAJ: Well thank you very much, I appreciate that. That was the idea when I got involved in it. The problem was that the industry was being run by people who didn't really live by where the music would be - where the music was developed. And, they were going through the music and focusing on what they thought would be the most commercial. And, ultimately that left out a tremendous amount of music, basically like if you were making a film, editing and lying on the floor. And, many of these pieces of music although they weren't commercial by someone's else's standards, umm, they were really absolutely essential, they were the building blocks of the coming generations to be able to know how to make music.

Today you have YouTube, if you have any inkling to what it is you want you can find your way. But fifty years ago, those things weren't available, unless you were born into a culture or befriended a culture or you befriended a culture, you hardly didn't know what was going on musically around you other than what was happening commercially. And, I was lucky too because I have both a southern parent which was a migrant to the northeast and then an immigrant parent that came from the Caribbean.

So I had a broad spectrum of music input in the beginning. But, I began to realize as I started communicating to people, probably in my teens that a lot of people that live, even in the same area, like a went to school like maybe three miles away from where I lived and most people had no idea what other music existed other than what was being sold. So I found that there was an area of music that was really viable, valid and creative and inspirational and I just got busy playing it and the result is that it spreads itself over generations because it wasn't focused on trying to please somebody to sell records. It was focused on bringing culture and music and support and foundation to not only generation I was in, but also for the generations on down the way. It's exciting to have you say that those things are happening, I mean I seen them, but it's always nice to hear someone say that.

Q: I've been just kind of randomly giving people a pop quiz and finding out how many people and what type of people and what age and I will tell you your music just crosses all cultures and all generations.

TAJ: It's all over the map (laughing). It depends upon where you go. I mean you can go to Africa and find musicians that have been following me since the sixties and you can go to South America or the Caribbean, Austria, New Zealand, Japan, Canada, all over Europe, the Middle East, Morocco...I mean it's just amazing because people they can hear that the music is inspired not by trying to sell it but for what it's intrinsic value is and that's priceless. You can't put a price on that, you know?

TAJ: Well that part was by design. There are plenty enough people who have interrupted, mis-interpreted blues as being something to bring you down so I don't really have to do that. You know that's not my bailiwick ...the point is that the blues covered really covers a myriad of human conditions and situations and emotions you know from the sensuous to the serious. And, so I just chose to be somewhere where I can pull all those things through, have fun and basically support people being positive. This is not something to give people the idea that they have to be negative or you know say things that do drive folks in a negative way and I'm not working with.

Q: So, what's your secret Taj? How do you maintain your positivity?

TAJ: Well you know, positivity is not without days of heavy weather, you know? But, that was just my focus. I think probably the Caribbean influence in my life as being really positive and the joy through the uplifting, spiritual/gospel music as a child. You know I mean the angle that we were heading toward as a culture, as Americans even then was look to the future as bright and positive and that was represented, those are the songs that move me, ya know? I just work, I don't argue with what seems to work.

Q: So what do you feel is your greatest achievement in your career and in your life?

TAJ: To do exactly as I want to do. To raise my kids so that nobody's making any license plates. And, in fact, I'm just coming back from the train, my youngest son just graduated from college thank you very much. It's just from just paying attention and being ... my greatest achievement has been able to do what I've wanted to do. Which has not been something that my folks have been able to do for generations cause everybody was working so hard, getting jobs and covering the basic needs of a family so they really didn't have time for too many other things but that is one of the things that they did have, one of the big things was music.

And, I've been able to do the music that I wanted, not the music that they wanted me to do, you know? And, people don't think that that's much but it's really a lot. They don't make an awful lot of road for you to be on your own. And, if you're on your own and you're managing to take care of your family and take care of your responsibilities and be creative, it doesn't get any better that's priceless. Ya know it doesn't get any better than that. That's the big thing, to do what I do, ya know, play it like I saw it and take care of my family and my responsibilities ... And, be funny and happy.

TAJ: Well, we'll try to stay out of trouble and keep that laughter and that music and that dance flowing.

Q: Any lasts words of wisdom for all your fans and the Verde Valley people coming out to see you this weekend?

TAJ: I'm not really trying, basically I'm just a conduit which the stuff steps down from pure light into something that everybody can hear and that's all it is. What happens is that when you think that you control it, that's when you lose your power. The power is there for it to come through you and get out of the way of it, you know? And, that's really what I do. I get out of the way. Ya know? And, let the ... 'cause for years, I tried to manipulate it this way.

You know in my early years, 17 to 24, I was trying hard to manipulate it. You know, and some things you could, but most of what I was looking for was where I eventually got to later on when I was like 27, 28, I just started really flowing then 'cause I got out of my own way. You know I reached out to some other kind of philosophies that maybe helped me in terms of being able to see how this thing works, how this universe works. You know it's boundless in what it has to offer, if you place yourself correctly and keep an open mind and keep and open heart, an open spirit and soul, you know? And, get out of your own way and let it come through, ya know?