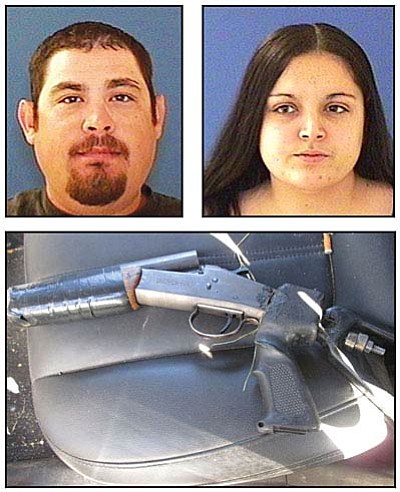 COTTONWOOD -- Monday, just before 8 a.m. Jesse Joe Sanchez III of Cottonwood, was waiting at a residence in the 1200 Block of E. Graham St. for his girlfriend, Meissa Lomeli, to return home, according to a report from the Cottonwood Police Department.

Officers were dispatched to Graham Street on a report of shots fired. Dispatch received a report of one gunshot related to the brawl. The reporting party stated the man left the scene in a black Chevy SUV with a "doughnut" tire on the right front of the vehicle. Moments later, dispatched relayed to officers the SUV was parked in a business lot across from where the incident occurred.

As officers were approaching the area, Sanchez was seen running through the parking lot where the vehicle was seen. Sanchez was stopped and detained and a pair of brass knuckles were found in his pants pocket.

More officers were dispatched to the Graham Street address and contacted Lomeli. Lomeli refused to respond to officer's commands and was being disorderly. Lomeli identified other man and stated the weapon involved in the incident was an airsoft gun but she could not provide the location of that gun.

Officers interviewed the home owner who observed Sanchez outside her residence with what she believed to be a "sawed off shotgun".

While searching the vehicle with a search warrant, the sawed-off shotgun was recovered as well as a purse belonging to Lomeli. Inside the purse Officers located several items of drug paraphernalia and some shotgun shells.

Meissa Lomeli, a 26 year old Cottonwood resident, was arrested for disorderly conduct, taking identity of another, 3 counts of possession of drug paraphernalia.