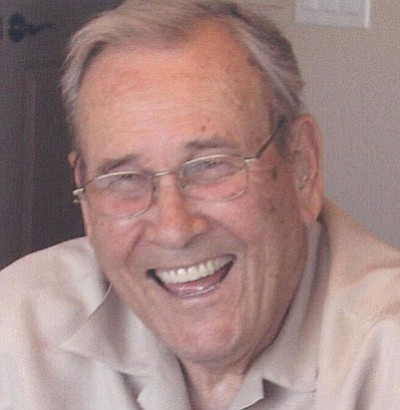 James "Jim" Rich, 91, of Cottonwood, Arizona, passed away peacefully on June 10, 2016 in his daughter's home among family. He was a beloved father, grandfather, great grandfather and friend to many.

Jim was born on June 12, 1924 in Stockton, California to Alton and Fay Rich. His youth was spent living throughout Northern California before settling in Phoenix, Arizona.

Jim moved to Cottonwood in 1994 where he spent the happiest years of his life with family and friends. He worked as an automotive technician for most of his life.

He was also a Veteran for the Unites States Navy and served during World War II with great pride.

Jim belonged to the Verde Valley Woodcarvers and Old Time Fiddlers. He was known by many for his love of music.

He loved singing along with his guitar and fiddle for others. He enjoyed cribbage, woodcarving, reading, western movies, making people smile, performing reiki on those in need and took great pride in his cooking.

He has an infectious smile, wonderful sense of humor and loved spending time with his family and friends.

He asked that there be no memorial service but that we just remember the fun, teasing, talented and beautiful person that he was.

In lieu of flowers we ask that contributions be made to Hospice Compassus of Sedona.