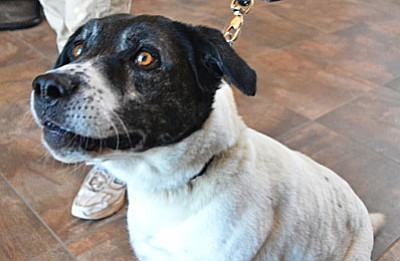 Some of the dogs that have been at the local shelter a long time are Bali, a 2-year-old cattle dog, has been at the shelter since October of 2015 and is considered a good family dog.

The Verde Valley Humane Society is concerned that rumors continue to spread that the local shelter "puts down" dogs when they are brought in, according to Tessa Unwin, the local shelter's volunteer coordinator.

"This is far from true," she said. "We have had dogs waiting for homes for as long as two years," she explained.

The shelter does not euthanize dogs at the Cottonwood Shelter, but in the case of sick dogs with illnesses such as distemper or court-ordered euthanizations, a veterinarian is called in, she explained.

"Our first priority when receiving a stray dog or cat from a city/county Animal Control Officer or Good Samaritan is to try and unite the pet with their owner," Unwin said in an email. "We scan for chips and post them pet on Facebook, Lost Pets of Northern Arizona." The shelter returned 361 animals to owners in 2015.

If after three to five days the owner does not call or is not identified, the animal becomes the property of the VVHS and is adoptable, she said.

The pets are advertised for adoption through various sites and are spayed, neutered, given shots, de-wormed and examined.

"Some pets who have been in resident for a very long time (months or years) may be transferred to one of our partner agencies to enjoy a new perspective," she pointed out.

Unwin said the shelter did put down dogs at the shelter five or six years ago and that may be the cause for the confusion.