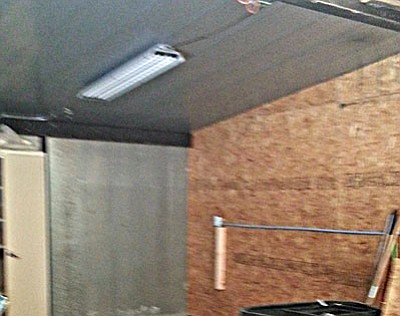 Oh yeah! That's me. I once again proved this to myself this morning as I turned my little ram lamb into a wether. For those folks who don't know, a wether is a castrated ram just as a steer is a castrated bull.

Since I can't let Toby breed with his sister, Tiny, I had no choice but to do the deed...and quickly! It's totally possible that Tiny is ready to come into heat this month and I caught Toby trying to mount her the other day. She's way too young to get pregnant.

Doing the deed required catching Toby, which I needed to do anyway. I bought them both collars last month and needed to get them on. I cornered the little sneaks near one of the turkey coops. They're fascinated with the turkey food--not at all interested in eating it, only sniffling in it. I put Tiny's collar on first, then, armed with dog leashes, I got Toby onto his back. It took me about fifteen minutes to do the deed, but that's because it was the first time I'd ever done it. The next time it won't take but five minutes. How did I know what to do? Well, my friend Doug Morgan described the process to me then I watched a YouTube video. This is the first farm chore I haven't learned how to do from a book. I swear, you can learn anything from a book, even how to be a farmer. Then again, I'm a writer, of course I'd say that. Read more books! Yada yada.

Today, my trash company came to retrieve the dumpster they brought last week. That's right. Over this last week, I've been doing the BIG BARN CLEANUP. It needs capitals. It was that sort of job.

This was something that should have been done 6 years ago when we first moved in. When Sam's heirs sold this house they sold it "as is", complete with the promise that they would take NOTHING from the house or barn. And they didn't. There were even clothes and shoes in the closets. The barn was full of stacks of empty tractor oil buckets, bins of plumbing supplies (from 1" to 4" pieces!), broken chain saws, a wall full of less-than-useful circa 1985 garden tools, workbenches that I swear were built in the 40s, and packrats. The cats came and the packrats departed. That left plenty of mice, which Spots keep down to a dull roar now that she's my only true barn cat. Fuzzy and Adventure Boy, her brothers, do what most male cats do, sleep and eat cat food.

As for her sister Socks, well, Socks has found herself a new home, judging by her plump silhouette the last time she dropped by to say "hi". Socks visits about once a month. I think she's trying to convince Spots to join her at this new and obviously less demanding residence.

But besides packrats, nothing else departed from that barn when we moved in. One person's clutter is another's treasure trove. Thus, we added to the clutter as he crammed his shop into what space was left, and stored rows of unopened moving boxes wherever there space. Shelves were added, metal cabinets were forced into corners. And where were the gardening/farming tools? In the darkest corner of the barn, of course.

It's almost been a year since I sent the ex packing, which he decidedly didn't do (pack, that is). I waited a few months, in case he intended to collect those things he'd left behind. When he didn't return for anything, the purging began. I started in the basement of the house, then moving to the exterior junk collection area under the porch. Before long, the house was clean but just looking at the barn and all that clutter made me shudder. I started with the moving boxes. By March, they were gone as were the items in them, mostly to thrift stores. I kept looking at my tools, trapped in that dark, cobweb-strewn corner, and sighing.

Then about a week ago the nephew of a friend's contractor showed up and asked if he could store a CNC (Computer Numeric Control) machine here.

He's in the process of moving his machine shop out of Phoenix and needs a temporary space, once big enough for the machine. This is no little hobby machine, but a big brute, one that makes real parts for real industrial uses. It's so big that it will take up the whole center of the barn.

It was a clear message from the Universe. "Stop dragging your heels and clean the barn!" So I ordered the dumpster and out things went, Focus-carload by Focus-carload. Scrap wood, degraded particle board, boxes, old work benches, bent or twisted bits of pipe, broken PVC pipe (saved "just in case"), empty paint cans (really?!), that one spare tile, that broken latch that could be fixed if it were needed--or rather if it could be found once it was needed. You can't imagine the duplicates of things I discovered, no doubt bought because someone couldn't remember where the first one went.

Days and at least a ton of dirt later, I couldn't be happier, although my back is still quibbling a bit. I had to move 2500 pounds of turkey food twice, a fifty pound bag at a time. Still, I grin each time I walk into the barn. I should have done this last summer. At last, my tools--the ones I use every day to do the work that is slowly turning this place into a farm--will be in the best-lit spot in the barn, right where they should be.

Oh, and speaking of tools, I bought a battery-powered hedge trimmer this week. Now, I don't have a hedge on the place, unless you include the out-of-control blackberries. However, the trimmer cuts reedy Quack Grass stems like they were, well grass! I am Woman, hear me roar--because my trimmer doesn't! Ha!