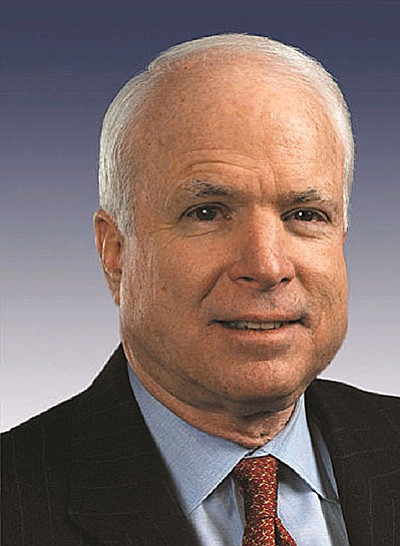 Civic Affiliations: Involved with numerous organizations due to role as a U.S. Senator

Question 1: What are the three biggest differences between you and your opponents?

McCain: Throughout my tenure in the U.S. Senate, I have championed legislation to create a stronger, safer and more prosperous Arizona. From ensuring veterans receive the care they have earned and fighting to keep America safe from the threat of ISIS to addressing drought and catastrophic wildfire, I have never shied away from confronting tough issues.As Chairman of the Senate Armed Services Committee, I will continue to advance policies that ensure Arizona's military installations and industry will continue to provide training and equipment that helps protect our nation. Recently, the Senate passed the 2017 National Defense Authorization Act which enhances Arizona's contributions to national security. From once again preventing the Obama Administration from prematurely retiring the A-10s stationed at Davis-Monthan to training the next-generation fighter pilots at the unparalleled Barry Goldwater Range, the 2017 NDAA will allow Arizona's proud military community to continue making critical contributions to our nation.

Question 2: Are there issues in which the Verde Valley has not been represented in Washington, and if so, how would you deal with them?

McCain: The two most important issues to the future of Arizona - especially vital to the next generation of Arizonans - are fire and water. Every summer our brave firefighters battle life-threatening wildfires, which is why I passed legislation in 2014 to transfer surplus military aircraft to the Forest Service to be used as air tankers to fight wildfires. It is among my priorities that wild land firefighters have the equipment and funding they need. At the same time, our lakes and rivers will become increasingly stressed as drought conditions continue. In 2013, the U.S. Geological Survey completed a detailed hydrology study that was required under a law that I authored to help Verde Valley communities improve the scientific information behind their water budget. If I am elected to the Senate in November, I will continue to address these critical issues so that our children and grandchildren can enjoy the natural beauty of Arizona that we enjoy today.

Question 3: Will you support your party's nominee for president?

McCain: I believe in the party of Teddy Roosevelt and Ronald Reagan and that the Republican philosophy of small government, a strong military and more freedom is essential to future peace and prosperity of our nation and the world. I am adamantly opposed to the continuation of the failed policies of President Obama that would occur under Hillary Clinton and have led to a world more volatile and less safe than any time since World War II.