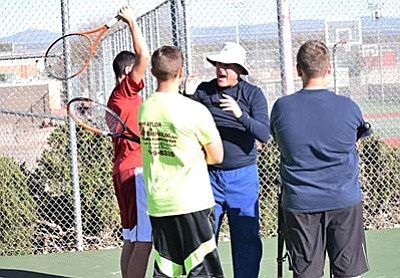 Larry Lineberry (middle) gives serving instruction to some of his players during a preseason practice earlier this year. (Photo by Greg Macafee)

COTTONWOOD- A season after the Mingus Marauders boys tennis team finished with a 5-9 overall record, they are back with a newly rejuvenated energy, along with new leadership in the form of Master Professional Larry Lineberry.

Lineberry has been a very big part of growing the sport of tennis in Northern Arizona and now takes on another responsibility as the Head of the boys tennis program at Mingus.

Some of his players are new, but Lineberry has senior Logan Connella returning along with Jerry Hernandez, Caleb Wylie and a couple others.

Connella was a part of the doubles team that went to the State Tournament last year, while Hernandez played as a Singles player in the State Tournament. Connella and his partner Terner Walz won their first match before falling to a team from Buena (Sierra Vista) High School.

Hernandez drew a tough contender in his first match of the State Tournament, falling to a former State Champion contender.

With a young and somewhat unexperienced team built of eight players, Lineberry just wants his team to enjoy the sport of tennis and get better in the process as the season carries on.

"My goal for this team is that they enjoy the sport and that they will play for the rest of their lives," Lineberry said. "If we win, we win, this is a tremendous sports and I want them to be able to enjoy it their whole lives and be skilled enough so as they play more and more, they get better and better, that's my goal."

Through the first few weeks of practice Lineberry has been teaching his team to enjoy the game as much as they cane and with the little bit of experience they have, hopes they can be competitive.

Through the first week of competition, the Marauders have lost both their matches 7-2, but have run up against some tough competition including the Prescott Badgers who were the former Section Champions last year and earned a No. 5-seed in the State Tournament.

The Marauders also faced-off with the Copper Canyon Aztecs, and will finish off this week with match-ups against Sedona Red Rock and Bradshaw Mountain on Tuesday and Thursday evening.

After just a couple weeks with his team, Lineberry sees that his kids are willing to work and if they continue to do so, he sees his squad winning a couple matches.