Ducey: GOP nominee -- even if it's Trump -- will get his full support 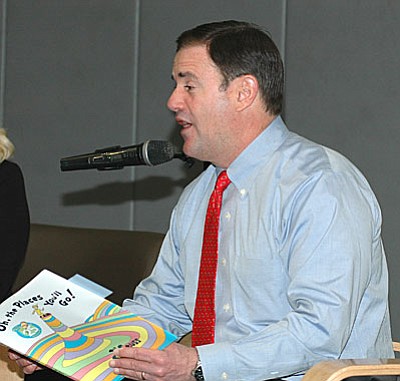 Gov. Doug Ducey reads to school children Wednesday on what would have been the 112th birthday of Theodor Geisel, better known as Dr. Seuss, ahead of telling reporters he'll support whoever the GOP nominates for president. (Capitol Media Services photo by Howard Fischer)

PHOENIX -- Gov. Doug Ducey said Wednesday he will back whoever his party chooses to be its presidential candidate -- even if it's Donald Trump.

"I'm going to support the nominee,' the governor told reporters.

"I think what's important is that we defeat Hillary Clinton,' Ducey said. "I don't want to see another four or eight years of the policies of Barack Obama.'

The governor did not dispute the sharp divisions the primary race -- and Trump's candidacy -- is creating within the Republican Party. But Ducey said he's convinced that, despite what's happening now, the GOP can coalesce behind a nominee, even if that is Trump.

"Part of the issue of having a competitive primary is that it can sometimes get very aggressive,' Ducey said.

"That's where we are right now,' he continued. "So let's run a primary where we settle on a nominee and then we're going to have to unify to beat Hillary Clinton in the fall.'

But the governor said he won't make his personal views known before the state's March 22 presidential primary.

"I have no plans to endorse,' he said. "The people are going to decide who the nominee is (nationally), and so will the people of Arizona.'

Ducey's decision to stay silent comes on the heels of Alabama Gov. Robert Bentley urging fellow Republican governors to back another of their members: John Kasich of Ohio.

The Arizona governor said he agrees with one thing Bentley said in his plea: that leading a state "can serve for great experience.'

Ducey, however, said the decision is "not up to the governors.'

"This is up to the people of the state of Arizona and the other primary and caucus states,' he said. "Let's see what they say.'

Bentley made the same plea to his own voters ahead of Super Tuesday, calling Kasich "the only adult in the room.' That endorsement did Kasich little good: Trump at last count had more than 43 percent of the vote; Kasich came in fifth with less than 5 percent of the vote, behind Ben Carson.

Ducey did not meet with Trump when the candidate came to Arizona late last year. But the governor said there's a good reason.