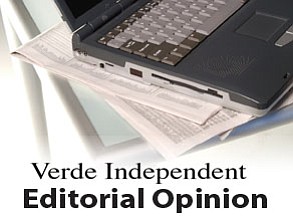 When the Steele Foundation announced last year that the University of Arizona would be the recipient of the 45.7-acre DK Ranch in the Verde Valley for a veterinary medical and surgical school, it was described as a win-win for all involved.

As it turns out, this new program is also a win-win for the state of Arizona and the entire nation as well.

Cronkite News Service recently reported that the shortage of large-animal veterinarians is a major threat to the health of Arizona's livestock industry.

The Cronkite News report stated, "Traditional veterinary medicine for large food animals in rural Arizona has all but vanished, a threat to the state's livestock industry that leaves the more than 1 million food animals raised in the state increasingly vulnerable to disease and even death. The state's $17 billion agriculture industry is served by just 30 USDA-accredited predominantly food animal vets. And 21 of those are in a single county. The other nine work across six different counties, leaving eight counties with no local vet."

Longtime Cottonwood ranch Andy Groseta said the problem is not unique to Arizona.

"This is a problem everywhere, not only in Arizona but throughout the nation. There is a major shortage of large animal veterinarians especially in rural areas throughout the country," said Groseta.

Groseta emphasized that the cattle industry in Arizona is very excited about this new U of A Vet-Med School.

The school, he said, "provides Arizona students the opportunity to go to vet school in a shorter time period resulting in less student debt. We need large animal veterinarians not only to practice in rural areas, but also to work on the international borders of the US closely monitoring livestock commerce (trade) including both export and import markets. It is a food security and safety issue. We need to protect our nation's food supply and veterinarians are a vital part of that protocol."

Groseta said there are a few large animal veterinarians that specialize with horses, "but very few that work on cattle, sheep, goats and hogs."

For Arizona's cattle industry, the new program will fill a huge void, and not a moment too soon.