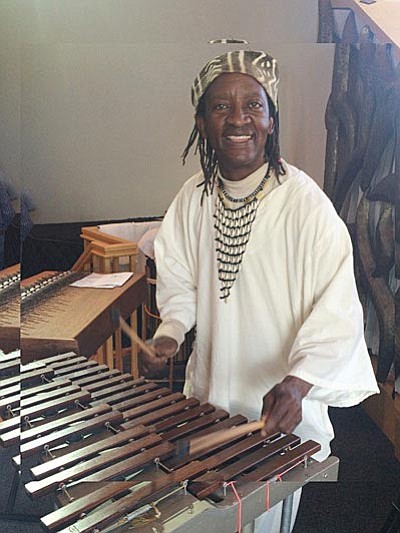 Music in the House presents Baba Vusi Shibambo, a South African multi-instrumentalist and international recording artist, in 'Music of the Ancestors', an evening of traditional ancestral music and storytelling, Saturday, March 26, 7 p.m., at the Sedona Hub.

Shibambo will sing in English and Zulu plus several other tribal languages including Venda, Shangaan, Xhosa, Sotho, and Pedi. The music is deeply hypnotic, healing, and mesmerizing.

He will also share Zulu folk stories from his childhood. These stories, often portraying the animals of the untamed African wilderness, have been handed down through the generations by the grandmothers to teach life lessons to the youth.

A descendant of the Royal Shibambo family from the court of the amaZulu people Shibambo's family were esteemed keepers of the skins and guardians of the tribal rhythms.

Under his mother's tutelage, he started playing drums at an early age and, in his ancestral tradition, continues to follow this path, reviving and preserving the heritage through the beat of the drum.

The band subsequently toured with the stage production, Ipitombi, performing worldwide for over 10 years to audiences in Israel, England, Africa, Ireland, and other European locations.

In 1993, Shibambo and his band were invited to the United States to be part of Northern Arizona University's World Peace Festival.To this day, long-term residents of Sedona and Flagstaff still stop Shibambo on the street to walk down memory lane sharing stories of great times they had while enjoying the music.

Shibambo has penned, choreographed and directed his own stage productions, commissioned by the South African Arts Council, the Arizona Commission for the Arts, and the Arts Endowment. He has also taught drumming and Zulu culture in the school systems here is Arizona and California for over 2 decades.

This concert will feature selections from Shibambo's solo CD, 'African Skin on Skin, Reflections of a South African Hand Drummer'.

This original music is a compilation of ancient African tribal rhythms blending the age-old teachings of the Ancestors of long ago with reflections of life growing up in the Apartheid era and the personal trials of modern culture.

Joining Shibambo on stage for the performance is local percussionist Connie Avery. Connie played traditional West African rhythms with the Arizona Dunun Ensemble for over seven years. The audience will also have an opportunity to participate, with a selection of percussive instruments Shibambo and Connie will make available. Dancing is encouraged!

Come and experience the power and joy of the African drumming tradition with a passionate performer who brings a rich personal history to his performances on Saturday March 16 , 7 p.m., at the Hub.

The Sedona Hub is located at 525B Posse Grounds Road, next to the Skate Park.