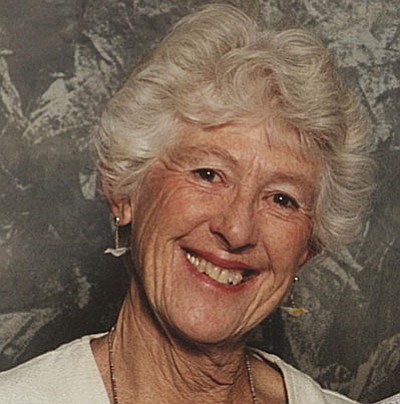 Barbara Faye (Hollingshead) Winslow passed away on Wednesday, March 16, 2016, at home in Cornville, AZ. Barbara was born October 12, 1929, in Jerome, AZ, to Clarence and Georgia Hollingshead.

She graduated from Jerome High School in 1947, attended the University of Arizona for one year and then transferred to Arizona State College, now ASU, where she received her BA degree in 1952. During her time at ASC (1949), she married her high school sweetheart, Rusty Winslow.

Barb was very active in the Quail Country Quilters which became her passion when she finally had time for herself. She is also remembered for her love of traveling/camping, identification of flora, and hiking the hills of Cornville. She loved harvesting and canning wild fruits, tubing on the Dolores River in Colorado, and cooking sourdough biscuits and gravy for family and friends.

Hanson, and great grandchildren Riley & Cora Hanson. She is also survived by her brother Don and his daughter Marcie. Per Barb's request, no services will be held. Donations in her name may be made to Verde Valley Community Hospice, Quail Country Quilters/Scrap Rats, or American Cancer Society.