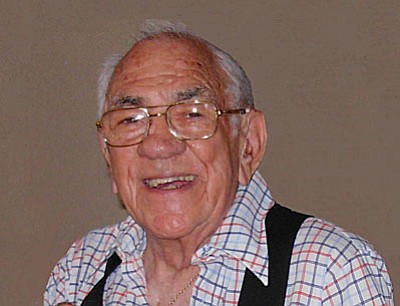 He served his country in the Army where he served as a Sergeant during World War II.

Mr. Percoraro worked for the John R. Morreale Meat Company in Chicago, Illinois where he was a plant manager. A hard worker all of his life, he retired in the mid-70s.

He grew up in Chicago, where he lived for 90 years. He loved to pheasant hunt and loved his hunting dogs. Mr. Percoraro enjoyed working in his yard and also enjoyed bowling where he once bowled a 279 game. He had a fabulous sense of humor, was always forgiving and loved people. He attended Immaculate Conception Parish when he moved to Clarkdale.

He was preceded in death by his sister, Josephine Larson of Canoga Park, California.

Mr. Percoraro is survived by the love of his life, his wife of 70 years, Lena; daughter Patricia Malloy and son-in-law Richard Malloy of Clarkdale.

A Funeral Mass will be held Monday March 28 in the Immaculate Conception Catholic Church at 10 AM. Burial will follow in All Souls Cemetery. Donations in his memory to Alzheimer's Association Desert Southwest, 1028 East McDowell Road, Phoenix, AZ 85006-2622. An online guestbook is available at www.westcottfuneralhome.com.