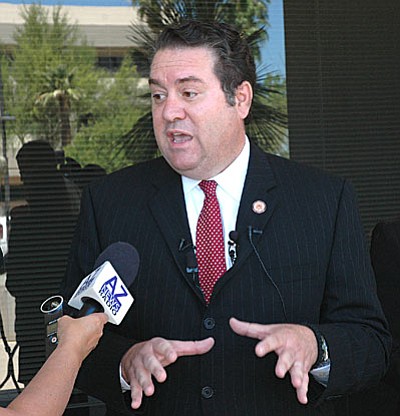 Attorney General Mark Brnovich explains Thursday that there's no precedent to postpone next week's special election despite foul-ups by Secretary of State Michele Reagan in sending out ballot pamphlets on time as required by law. (Capitol Media Services photo by Howard Fischer)

PHOENIX -- Attorney General Mark Brnovich refused today to try to cancel next week's special elections despite foul-ups by Secretary of State Michele Reagan, saying there's nothing in state law to permit that.

At a hastily called press conference, Brnovich unloaded on Reagan for failing to comply with state laws requiring voters to get ballot pamphlets explaining the two issues before they got their actual early ballots. And he said there needs to be an investigation of why Reagan hid that information from the public for so long.

"This was a complete fiasco,' Brnovich said.

"I don't know what the right word to express it,' he continued. "But it pisses me off, as an Arizonan, as the attorney general.'

But Brnovich laid some of the blame on lawmakers for leaving him with his hands tied.

"We know that we want strict compliance with election laws,' he said. "But the legislature never provided any penalty.'

Neither Reagan nor her press aide immediately returned calls.

Reagan spokesman Matt Roberts conceded earlier this week that at least 200,000 pamphlets explaining Proposition 123 and 124 did not go out on time. The first deals with increased funding for public schools; the second alters constitutional provisions on public pensions.

Robert said he believes the affected households are all outside the two major counties.

The affected homes appear to be those with two people who are on the list to get early ballots. That means more than 400,000 voters could be affected.

Roberts acknowledged his boss knew about the problem weeks before it was publicly disclosed. But he said she was doing the best she could in the interim to mail out the pamphlets to those who did not get it.

"Why did it take weeks to inform the public?' he asked.

Arizona law mandates that one pamphlet goes to every household with a registered voter. It contains not only what is supposed to be an impartial explanation of every measure but also pro and con arguments.

The gap in mailings went unnoticed publicly until attorney Tom Ryan pointed it out earlier this week and asked the attorney general to intercede.

Brnovich said Ryan is free to file his own legal action if he believes there are grounds to postpone the vote. But Ryan already has said he lacks the resources to bring a challenge which would have to be made against election officials in all 15 counties.

Brnovich also said there is no legal recourse against Reagan. He said that is up to voters.

"We do know and do believe the secretary of state violated Arizona law,' Brnovich said. "Unfortunately, there's nothing in the statutes that provide an adequate remedy.'

But Brnovich was more than clear in his displeasure. He pointed out the law says Reagan "shall' get the pamphlets out into the homes of voters ahead of the early ballots being mailed.

That should have happened no later than April 20.

"This is a mandatory duty,' he continued. "She failed to do her duty.'

"This put a lot of people into a bad situation,' he said, pronouncing himself "frustrated.'

"It seems like every time we have an election here it ends up in a goat rope,' Brnovich continued. "It's incredible we can't get these things right.'

Brnovich said he now is focused on preventing something like this from happening again -- and putting something in law to allow for some legal remedy if it does, whether to halt the election or to punish the elected official who breaks the law.

"What can we do to make sure that there are sanctions in the future if an elected official or anyone else doesn't comply with the law,' he said.

Legal barriers aside to canceling next week's election, Brnovich said that is "not the best course' for the state and its voters. He said that would disenfranchise the approximately 700,000 people who already have cast their early ballots -- even if some of them were mailed out before people got the pamplets.

"We're faced with the situation where you're less than a week before the election, early balloting has already started,' Brnovich said.