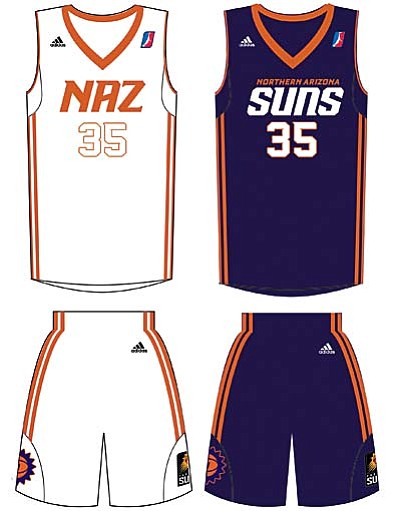 Standing on a makeshift stage on a basketball court toward the east end of the center, NAZ Suns President Chris Presson discussed the meaning behind the logo - complete with its 16 triangular purple flares (for 2016, the year of the team's founding) and the orange directional arrow on the top flare pointing to true north.

An emblem with a basketball and the purple letters "NAZ" in the middle of the sun complete the logo. To a great extent, the logo reflects what the team hopes to build with its fan base in Yavapai County.

"We have to infuse ourselves into the community," Presson said. "This is a basketball business, but the keyword is it's a business."

During the presentation, Prescott High basketball star Tyler Bell and Bradshaw Mountain High's Tim Young entered from behind a curtain to reveal the white-and-orange home jersey and the purple-and-orange away jersey.

Bell said two days ago, when he walked into school, PHS Athletic Director Missy Townsend and basketball coach Adam Neely asked him if he wanted to model one of the NAZ Suns' jerseys. Bell, a senior who will compete for NAIA Benedictine University-Mesa in the winter, didn't hesitate.

"I was like, 'Yeah, sure. Why not?' " added Bell, who, like Young, didn't get to keep the uniform. "It was a lot of fun to come out here and be a part of something that, hopefully, will be here for a really long time.

"And when I come [back] up here every summer [from Mesa] I will be able to say that I was a part of something that's the beginning for up here in northern Arizona."

On Monday, in sixth hour P.E. at Bradshaw Mountain High, Athletic Director Mark Ernster pulled Young, a sophomore, out of class and asked him if he could present one of the uniforms.

"I hopped on right away," Young said. "I was like, 'Of course.' It's awesome [to have this team here] because we get to watch these guys, and we learn a lot from them - just watching them, just how they play, the intensity. And it's cool to have local people that you can look up to. This will help me a lot, knowing I wore these jerseys, so I will relate to them [players]. And I'll be like, 'I remember wearing that jersey. That was pretty cool.' I will come out and support them."

Haley Young, Tim's older sister who plays varsity basketball and softball at Bradshaw Mountain High, sat in the front row on the floor for the uniform presentation. She said the team will give the community something to rally around.

"It's pretty awesome - I love going to professional sports and watching it and like seeing how they play compared to us," said Haley, a junior. "And it's really going to help the community, too. It will get us excited about something. "

Presson also expressed how the NAZ Suns, formerly the Bakersfield (California) Jam, will reach out to the quad-city area communities of Prescott, Prescott Valley, Chino Valley and Dewey-Humboldt to give the residents an affordable sports/entertainment option.

A new basketball court, complete with the NAZ Suns logos, will arrive at PV Event Center July 1, Presson said. The NAZ Suns will also have their own mascot.

"We got approval from the NBA today [Tuesday] to add a few modifications to our court design from what we presented," Presson said. "The NBA Developmental League office approved it, but the NBA said, 'Hey, we'd like you to do this.' We will have another community event around the unveiling of the court. Then we'll have open houses and a fan fest or two."

The PV Event Center has gone without a main sports tenant since the now-defunct Central Hockey League's Arizona Sundogs folded two years ago. It remains unclear whether another minor league hockey franchise will make the center its home.

Presson was the general manager of the Sundogs for four seasons until they dissolved. Today, he also works in the front office of the Arizona Rattlers Arena League Football team in Phoenix, in addition to his work with the NAZ Suns.

"I am truly excited to be back," Presson told the crowd. "I'm a little overwhelmed by the turnout and I'm impressed by it. You will see us involved in this community over the next several years. The Suns are the oldest professional franchise in Arizona, since 1968. And we want to be here in 2068."

In April, the Phoenix Suns announced that they had bought and would be relocating their NBA Developmental League affiliate, the Jam, to Prescott Valley.

The Northern Arizona Suns will play 24 home games at the Prescott Valley Event Center during the 2016-17 season as part of a record 22-team league. Fans in Northern Arizona will have the chance to watch NBA-caliber talent. D-League representatives report that 43 percent of NBA rosters at the end of the 2015-16 season were comprised of players with D-League experience.

"It's going to be super cool because, just like with the Sundogs, we'll have a team to have energy with," Haley Young said.

Fans interested in buying season tickets for the NAZ Suns may guarantee their seats with a $50 deposit by visiting NAZSuns.com or by calling 928-772-SUNS(7867).

The team is still conducting a unique sweepstakes on its website in which fans may enter to win lifelong season tickets.

Presson said ticket prices will be announced soon, followed by the release of the NAZ Suns 2016-17 schedule. A coaching staff should be announced later this summer.