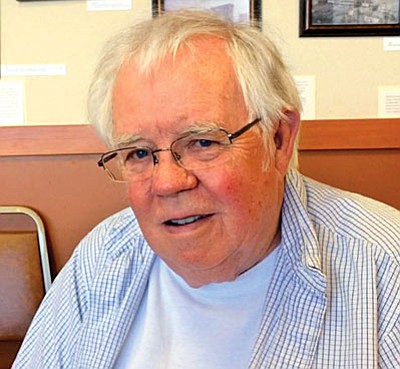 Jerome Mayor Lew Currier: “These are not residences, these are commercial activities... People who live in residential zones choose to be there to have the peace and quiet and joys of a residential neighborhood. (VVN/Vyto Starinskas)

VERDE VALLEY - In a measure that some feel will damage local communities and others believe will affirm property rights, Gov. Doug Ducey signed SB 1350 on May 12, a law which includes a provision prohibiting local governments from banning vacation rentals.

The core basis of the newly-signed bill deals with money. The state's position is that it was missing-out on unreported tax revenue from home owners renting their property to vacationers. A provision in the bill places transaction tax collection in the hands of online rental websites and property management companies. The bill also disallows municipalities from banning homeowners from renting their properties, even if done on a nightly basis in a residential neighborhood.

As part of the law, Provision 7 states: "Stipulates that a city, town or county cannot prohibit, restrict the use of or regulate vacation rentals or short-term rentals based solely on their classification, use or occupancy."

Provision 7 addresses a lawsuit brought against the Town of Jerome by owners of The Pink Lady, The Zamar House, The John Riordan House and The Top-of-the-Town Penthouse. The town's position is that vacation rentals are allowed only in areas of town zoned for transient housing, but not in areas zoned residential. The property owners' position is that business licenses had already been approved for their residential-based rentals.

A key sticking point in the lawsuit against Jerome refers to the Private Property Rights Protection Act of 2006, which requires the government to reimburse land owners when regulations result in a decrease in the value of a property.

Backers of the bill

Aside from property owners, proponents of the bill include internet commerce associations (websites such as Airbnb and VRBO), vacation rental managers and - - most visibly - - the Goldwater Institute, a private property rights advocate which filed suit on behalf of Jerome vacation rental owners.

"I think this is great balance. It ensures property rights and sharing economy and still allows cities and towns to regulate nuisance laws and safety laws," said Jared Blanchard, attorney with the Goldwater Institute. "It says that short term rentals cannot be banned, but can be regulated like any other property."

Blanchard says homeowner associations are exempted from the new law, "as it's a private contract. They can choose to regulate vacation rentals."

One backer of the bill is Glenn Odegard. Through his company Nordic Properties, he purchased an historic Jerome home in June 2012. In court paperwork filed Sept. 18, 2015, Odegard states he "painstakingly restored the John Riordan House from its vacant and abandoned state" and that in the process he was granted "3 separate building permits" as well as a "business license for 2013, 2014 and 2015."

However, an April 1, 2015 vacation rental analysis by Jerome Zoning Administrator Al Sengstock stated the only permissible short-term rental in Residential 1-5 was a Bed and Breakfast. Odegard was sent a letter advising he would need to apply for a Use Permit. Odegard joined other plaintiffs in seeking "Special Action and Declaratory and Injunctive Relief" in Superior Court, with representation by the Goldwater Institute.

Opponents of the bill

Opponents of the bill include local governments which previously relied on zoning to preserve the residential character of neighborhoods. They see this as another undermining of local destiny through state-legislation that has handcuffed municipalities from regulating everything from plastic bags to puppy mills.

"I don't think this helps us at all," said Jerome Mayor Lew Currier. "Phoenix (legislature) is getting very involved in municipalities and I wish they'd back off a little."

Currier has expressed concern in the past that short-term rentals - - now protected by law - - disrupt residential neighborhoods and that is why Jerome has separate areas for transient and residential usage.

"These are not residences, these are commercial activities. The owners don't live here. They live in Phoenix or Southern California," Currier said.

"Our zoning ordinance says this is a commercial zone. People who live in residential zones choose to be there to have the peace and quiet and joys of a residential neighborhood. This could be denied them because of this project," said Currier.

Jerome isn't the only town affected by passage of the law. Other small resort-oriented communities such as the Town of Clarkdale and the Village of Oak Creek may also see changes in its neighborhoods.

"The problem you have with a commercial business in the middle of a residential neighborhood is, how could people anticipate what they could be buying next to?" said Town of Clarkdale Mayor Doug Von Gausig. "The added traffic - - those people are not paying to maintain the roads, the residents are. All those extra cars with no place to park - - it's less safe for emergency responders."

"It's gross negligence on the part of the legislature. I think they should run for town council. That's the work they're doing now," said Von Gausig.

The Village of Oak Creek has already experienced vacation rental issues that officials believe will be exacerbated by the new law.

"I think it's unfair. We have had whole blocks of neighborhoods turn into short-term rentals and it really changes the character of the neighborhood," said Steve Mauk, Yavapai County's director of development services.

Mauk said he needs to study the signed bill, but he is looking at utilizing "some mechanism" for continued compliance with existing public concerns such as safety and permitting."

Ironically, the Town of Jerome mayor and council had a pre-scheduled Executive Session to discuss a defense to the vacation rental lawsuit when news arrived that the bill had been signed. However, the meeting with their attorney carried-on as scheduled.

"We are still looking at it some more. We still have questions in our mind, but we haven't thrown in the towel," Currier said.