Life in the Slow Lane: A Dog, Two Pigs and a Mushroom 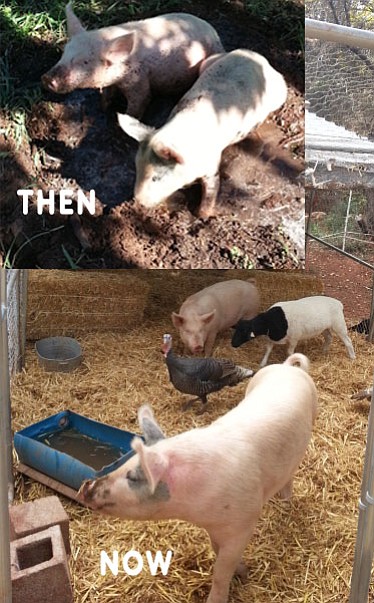 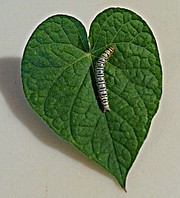 Poor Bear. He got bitten while I was off visiting relatives, although my farm sitters didn't recognize the marks as a bite. Theories ranged from Pink Eye to a bee sting. That's because they don't know Bear the way I do. He's way too mellow. One might even say incautious. He'll do silly things like let the turkey poults nestle next to him (drives the hens into a frenzy) or go to sleep in the pig enclosure.

It only took one look for me to recognize the placement of the two bloody spots. I instantly knew what had happened. He'd laid down near the now-fully grown hogs/gilts and closed his eyes. It must have been just too tempting for one of the girls. Which one, you might ask? Well, my money's on Boinker. That's because she's the one who likes to make newcomers dance by chasing their toes. She's also the one who, as a little bitty 40 pound weaner crawled on top of Bear, then slid down his side to clamp her even-then-formidable jaw on his paw.

Of course, now the girls are more like 150ish, very possibly more. Not only are they solid, they're darn fast. Which makes Bear's lapse of caution all the more interesting. I'll say this much--he gets positively antsy around the girls these days. If they get within ten feet of him, he's up and moving. Yep. Pig bite, or rather love bite. If she'd meant to hurt him, Bear would have been blind in one eye or even dead.

Hogs are definitely terrifying, mostly because they're not just strong and fast, they're smart. Not that any of the other animals on the farm are particularly afraid of them. The turkeys rush in to grab bites of food right next to the girls' snouts. The sheep jockey for position around the trough as well, trying to grab mouthfuls of "the good stuff". (Although I am committed to 100% grass-fed sheep, the sheep are far less committed to this goal.)

I even caught Oinker playing with the sheep the other day. She chased them until they started doing that odd all-four-feet-at-once bouncing, then tried to bounce the same way. Impressive at 150 pounds! Where is my camera/phone when I need it! Never in my hand, that's for sure.

Back to Bear. Although he may now be cautious around the pigs, it doesn't translate to the rest of his life. This morning he was sleeping with his head under my Focus. Luckily for him, I knew he was there. Honestly, that dog!

On to the mushroom portion of this post. My loyal readers--you know who you are :-D--may remember that I plugged a cottonwood stump with shiitake spore. Last spring, I got about a pound off the stump. It being Autumn now, and Autumn and Spring being the two seasons that mushrooms fruit, I decided to check to see if there was any sign of more shiitakes.

Well, something's happening but I don't think it's quite what I was hoping for. There's a long pale brown line topped by a glistening white circular crown growing up one of the stump's woody ribs. I'm positive it's not a shiitake. It actually looks, um, a little ina ppropriate in the Disney/Little Mermaid sort of way--hence the lack of picture. But while I was examining that stump I glanced down toward the ditch and gasped. There was a HUGE native Oyster mushroom growing out of a chunk of that old cottonwood that had been left to rot.

Having never harvested anything this big prior to today, I wasn't really certain that it was edible. It smelled good, but, hey, it's a mushroom and I'm no mycologist. No sense taking chances. So what did I do? I broke it up for the pigs and turkeys to eat. They have far better sense about these things than I ever will. I'll go down later and see if I wasted a great asset or made the right choice.

Although I didn't bother adding this to the title of today's piece--it was long enough as it was--I want to share an interesting tidbit. My friend Ken Sanchez is an amateur Lepidopterist. When he was up visiting earlier this summer he insisted he saw a Monarch butterfly. Now, I've seen both Queens and Viceroys around here, but I was positive we don't have Monarchs here. After all, there's no Milkweed and that's what Monarchs want, right? Then a few weeks later I found this caterpillar on my Morning Glories. I took the picture then put the leaf back where I found it and went on with my day. I didn't give it any more thought until this morning when I was standing in the driveway looking down at the huge patch of turnips that I accidentally overplanted-the seed package broke, so I just raked all the seeds into the soil--and what looked like a Monarch butterfly when soaring past me. Wow! What if? Way cool!

And lastly, a final note on my late harvest tomatoes. Boy, oh boy am I praying that the first frost holds off for a few more weeks. The tomatoes I planted back in late August are going great guns. Apparently, after the bees had finished sucking the good stuff out of all the fallen apples (and recovering from their hangovers), they went to town on the tomato plants. I have dozens upon dozens of beautiful little green tomatoes, tomatoes untouched by the usual nasty thieves and nibblers.

I can hope all I want, but my bones suggest that frost is just around the corner. I suppose that's okay too. I can turn those green tomatoes into Green Tomato Chutney. I love that chutney! It pairs perfectly with chicken, is great with rice and probably would be good with black beans, my new favorite bean soup bean. The only caveat is that you have to open the windows and doors while you're cooking it. The stink is similar to well-used sneakers.

Oh yeah, that'd put Bear's head back under the car in a heartbeat.