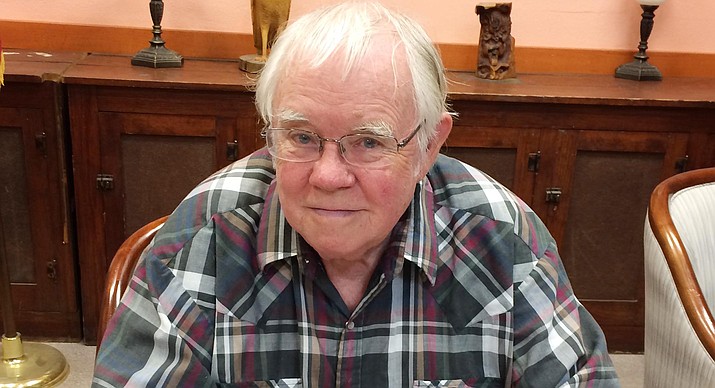 Jerome Mayor Lew Currier will sing his swan song Nov. 8 as he addresses council during his last session as mayor. (Photo by Tom Tracey)

JEROME – “Lately it occurs to me what a long, strange trip it’s been.” – Grateful Dead

Mayor Lew Currier will give his outgoing remarks Tuesday, Nov. 8. as a new mayor of Jerome is elected by council - - traditionally, the top-vote getter from the Aug. 30 primary.

Currier, who barely enough votes to remain as a councilmember, rode the rough seas of buckling infrastructure and empty faucets, vacation home rental suits and tax tiffs, the Leaning Wall and the Sliding Jail.

The popular mayor was known as a moderator in a town where individualism is celebrated. Some say he may have been victim of incumbent backlash as he attempted to balance the realities of government administration with a town known for its populist culture. Currier himself said the day after the August primary that “I didn’t do too much campaigning. I wasn’t sure I wanted to run because it was time for maybe some new people to come-in. Well, people would keep coming-up to me and saying, ‘You should run.’ This is what happens when you don’t listen to your original instinct, I guess.”

Being sworn-in for a two-year term will be Currier as well as freshman councilmembers Jay Kinsella and Hunter Bachrach. Returning councilmembers are Christina “Alex” Barber and top vote-getter Frank Vander Horst (who may end-up mayor). The September resignation of Abe Stewart created a seat filled by Bachrach. Meanwhile, former Vice Mayor Doug Freund declined to run.

Also to be accomplished by council is whether or not to renew its legal services contract with Town Attorney Bill Sims. Council has considered proceeding with a Request for Qualifications to explore its options, while Sims has asked to remain at the same rate and terms. Sims represented the Town of Jerome as it was being sued in civil court over blocking vacation home rentals. The suit was dropped after the governor signed legislation preventing such bans.

However, that won’t stop the Town of Jerome Council Tuesday from considering whether to follow Prescott’s lead in regulating - - but not banning - - vacation home rentals. Once discussion is over, council may vote to approve a similar ordinance for Jerome.

Council and interested public will also hear the results of an isotope analysis of Jerome’s water supply by hydrologist Kristine Uhlman. The town suffered a water emergency earlier in the year that remains unsolved.

The Town of Jerome Council will meet at 7 p.m. at 600 Clark St. A copy of the agenda is posted at Jerome Town Hall, the Jerome Library and online at www.jerome.az.gov.