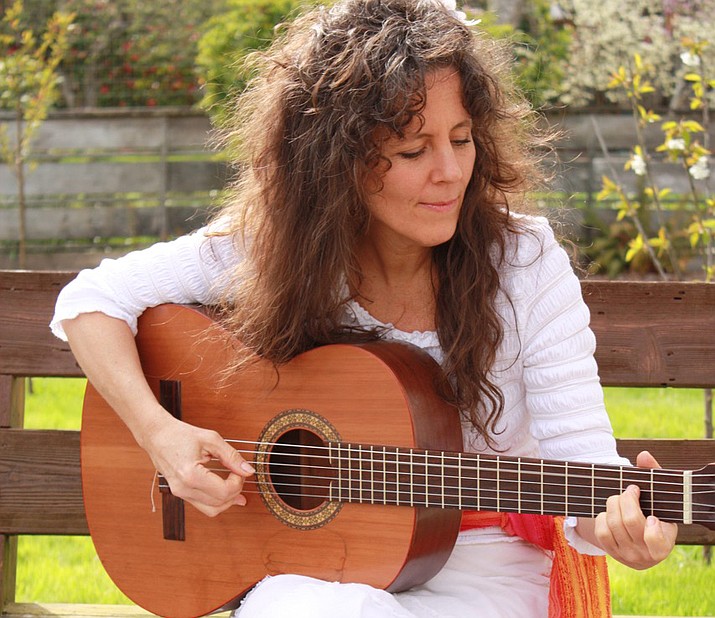 What: Gary Simpkins with Sonja Whisman – Live in Studio B

Where: Studio B, 633 N. Fifth Street, in Cottonwood

SEDONA – Vino Di Sedona, Fine Wine and Craft Beer has been bringing Sedona the best in entertainment for the past two years, and this week is no exception. Wednesday, Nov. 9, enjoy a night of music by Rick Busbea from 7-10 p.m. He has made a name for himself in the Sedona music scene performing rock and country classics and originals since relocating here in Sept of 2014. Busbea has been playing guitar since he joined the Air Force in 1977, and still has his original guitar, a Yamaha FG340 concert size acoustic. His first performance was in Egypt while serving for the American Embassy in Cairo.

KB Bren is back for another fun night of rock n’ roll at Vino Di Sedona Thursday Nov. 10 from 7-10 p.m. KB is a Sedona resident with a life-long music career. In the 1990s and early 2000s KB played with well-known bands, such as Grateful Fred and Cold December. KB will be playing his new originals, and old favorites with a few covers mixed in.

Be swept away to the feel of a 1960s beach party when Randy J takes the stage at Vino Di Sedona Friday Nov.11 form 7-10 p.m. Randy is famous for his 50s and 60s style surf guitar. Born in Orlando, Randy J moved to Los Angeles in 1987 and shortly thereafter began composing music for film trailers and TV spots. He returned to Orlando and formed his band the Tarantulas in 1995; now a Sedona resident, Randy performs as a solo artist and with The Tarantulas as the guitarist and lead singer.

Saturday’s double dose of music at Vino Di Sedona Nov. 12 features two local Sedona favorites, Paolo, and Alex Ogburn. Paolo’s jazz classics accompany afternoon wine tasting, 3:30-6 p.m., his favorite song is always the one he is performing at the time, and he really puts himself fully into his music. Ogburn takes over for night-time entertainment with rock and authentic blues from 7-10 p.m. Ogburn’s music career has taken him from Birmingham to Orlando to Sedona. In Birmingham, Ogburn began playing in pubs and restaurants at the age of 19. The years in Birmingham contribute to Ogburn’s fiery and soulful Southern blues. Ogburn’s show will include unique interpretations of a wide range of choice covers, and eclectic originals.

Sunday, Nov. 13 brings Rick Busbea back for another night of music from 6:30-9 p.m. “Rick adds his own flavor to the songs that he covers, and is one of Sedona’s favorite entertainers,” says Vino Di Sedona owner Wes Schemmer. Rick performs covers by other well know singers, and also performs originals songs he has written. You can also see Rick at Vino Di Sedona this month Nov. 20 and 23.

No Monday Blues needed at Vino Di Sedona, there’s music every Monday to start your week off right. Listen to mesmerizing music by Gina Machovina Nov. 14 from 6:30-9:00 p.m. Gina is best known for her virtuoso guitar playing and smooth, sultry vocals. It’s hard to believe she used to be in a heavy metal band. As a student and performer of classical guitar music for more than 30 years, Gina also played lead guitar and wrote music for her hard rock-band, Rising, in Southern California. More recently, Gina has performed solo as a singer/songwriter throughout the Pacific Northwest where she recorded her first CD, Mirrors. She now resides in Sedona and plays extensively throughout Northern Arizona. Beautifully mesmerizing, Machovina’s music is a soulful mix of guitar masterpieces with passionate vocal tunes spanning many decades.

Sedona’s best Open Mic night, hosted by Dan Rice is every Tuesday from 6-10 p.m. at Vino Di Sedona. Each musician is allotted an amount of time, or number of songs, and every week brings a variety of new talent along with regulars like KB Bren, Jim French, Rick Busbea, Randy J, Lisa Hart, Vickie Moyer, and Dave Rice who frequently play at Open Mic.

For more information or to see the full calendar of events, visit www.VinoDiSedona.com Local guitarist Simpkins to perform at Studio B Nov. 10

COTTONWOOD – Gary Simpkins is a dynamic performer/singer/songwriter with plenty to say and plenty to sing about. And sing he does. With smooth voice and unique guitar style, Simpkins pulls you into his songs and holds you there throughout the evening.

Simpkins’ choice of songs is wonderfully eclectic. He includes a mix of cover songs and original tunes, from a soulful performance of Jimmie Webb’s “Wichita Lineman,” and a truly silly and entertaining version of the ’50s tune “Little Darling” by the Diamonds, to deep tracks by Ian Tyson and Travis Edmundson, to innovative originals like “Stay Low, Move Fast,” about people wanting to take your stuff.

He has been around the folk/rock, singer/songwriter scene since the ’60s, cutting his teeth on the open mic scene in his college days in New Haven. He’s played gigs all over the Northeast, notably at the Bitter End in New York City, Club 47 (Now Club Passim’s) in Cambridge, the Exit in New Haven, and Salt in Newport (where he opened for Maria Muldaur).

“No time in history did music make as much of a difference than in the ’60s,” reflected Simpkins. “Many of the songs I do, including songs by Dave Mallett, John Phillips, and, of course, Bob Dylan, are more than just protest songs. They are a mirror into everything ‘60s - the war, politics, social justice, free love - everything.”

Simpkins moved to Arizona in the ’80s and for the past 25 years has been playing folk festivals and shows throughout the region in and around the Verde Valley. He has also almost continuously run open mics since the ’60s, and is dedicated to giving new musicians the same mentoring that he had when he started out in New Haven. He met his musical collaborator, Sonja Whisman, at a music bar in Cottonwood, and her wonderful fiddle/violin and vocals have been an important part of his recent performances.

Studio B is part of the Old Town Center for the Arts, located at 633 N. Fifth Street (Fifth and Main) in Cottonwood, and hosts acoustic performances on the second and fourth Thursdays of the month. Admission is $10 - cash only at the door.