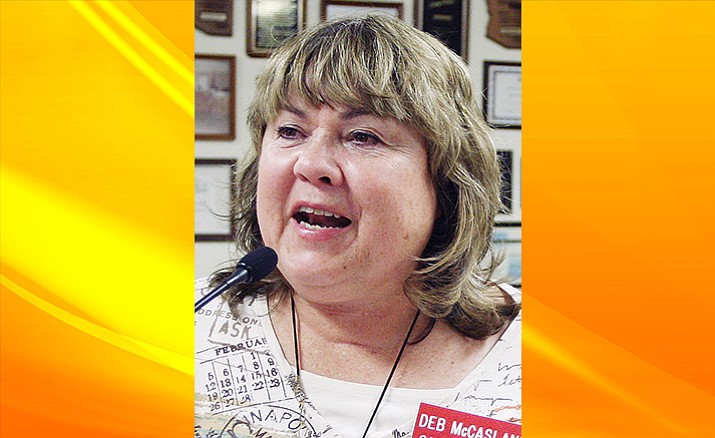 Not only did she celebrate President-elect Trump’s victory over the wife of former President Bill Clinton, but McCasland also celebrated a personal triumph over challenger Walt Nagy as she reclaimed her District 2 Representative seat on the Yavapai College District Governing Board.

According to unofficial results posted at 8:14 a.m. Wednesday, McCasland defeated Walt Nagy by nearly 13 percentage points, with 6,051 votes to Nagy’s 4,675.

“It was interesting,” said McCasland, who in 2014 was first elected to the District Governing Board. “But I’m happy. I prevailed. And we’ll move forward.”

Said Nagy following Tuesday’s election, running for the college board “was a good experience.”

“I’ve met some wonderful people,” said Nagy, also a Prescott Valley resident. “I’ve come out to the Verde Valley eight times and met a lot of great people. In the past five months, I’ve learned a lot about post-secondary education.”

Nagy also said that he was “disappointed” with the outcome of the election. But he was “running against an incumbent,” he said.

McCasland, whose election is for a six-year term, said she is happy to “still be a voice for the Verde Valley and the outlying communities.”

“I hope that [the other district governing board members] will listen to voices of the Verde Valley,” said McCasland, who ran her first campaign promising to not be a “rubber stamp” for the college’s administration.

“I’m going to keep representing the Verde Valley, the underserved with my position on the board,” McCasland said. “What I hope to bring about is more tax dollars spent in the Verde Valley, not a soccer complex or lecture hall in Prescott. Our tax dollars need to be spent on education. And I hope the other board members follow suit.”

In a recent Q&A published by Verde Valley Newspapers, McCasland stated that as a district governing board member, Yavapai College is responsible for serving the needs of “all of Yavapai County.”

“Statistics prove communities prosper when they have educated citizens,” McCasland stated. “The Verde Valley is just one of the rural areas of concern to me whose interests are not met by a centralized community college model. Each area needs a voice and participation in the decisions regarding the allocation of resources. The Board needs to redistribute funds from the Capital Improvement fund currently designated for a soccer complex and new lecture hall in Prescott, to instead provide CTE and distance learning/satellite campus options.”

An Arizona resident for 28 years, Nagy said that he would “not be opposed” to being involved with the college “in the future.”

“The college was responsive to all my questions,” Nagy said. The college has been great.”