Former Doublemint Twin, USO entertainer continues supporting veterans’ causes
‘It’s a time to be thankful for the lives that we are blessed to live’ 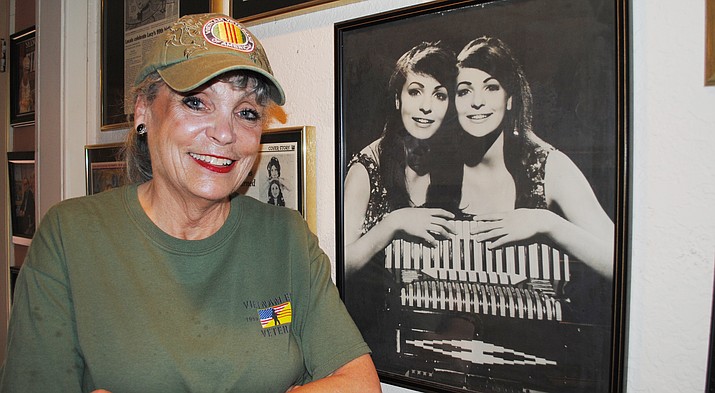 Terrie Frankel, Verde Valley Military Park committee member, poses next to a picture of herself and twin sister, Jennie, during their Doublemint Twin days. Frankel, a former Vietnam USO performer, said the park is “absolutely marvelous” and looks forward to the Nov. 11 ribbon-cutting at Garrison Park in Cottonwood. (VVN/Jennifer Kucich)

Frankel, whose father had proudly served in WWII, has always been interested in military affairs.

When she and her twin sister, Jennie, were in their early teens in Chicago, their father would take them to the Great Lakes Naval Hospital to perform for sick and wounded sailors.

When the musically gifted sisters turned 18, their father saw an ad in the Chicago Sun Times requesting an accordionist to go to Vietnam with a USO troop.

“My father wrote to them and said ‘I have two accordionists’. So we auditioned at the Downtown USO. And really, within - it could have been a month - we were on a plane to Vietnam - in Vietnam with USO,” said Frankel.

The reason the USO wanted an accordionist is because they wanted someone who could perform without electricity - which set them apart from the Bob Hope USO, said Frankel.

Frankel said she and her sister were treated well during their 1968 venture, and would be taken “out to the boonies” to perform for the servicemen in the field who would not get entertainment.

“Often they would be waiting for hours in make-shift helicopter pads in the middle of nowhere for us to arrive,” said Frankel.

The twins felt safe during their time in Vietnam, but there was an incident that frightened them. The sisters stayed at the Saigon Hilton, and weren’t allowed to perform at night. But one time, they were out “in the middle of nowhere” and were allowed to sleep in tents.

“In the middle of the night, they rousted us up and said that VC – that’s Viet Cong – had been spotted in the area. So they put us on these helicopters and popped out the windows and shadowed into the night sky and drove us back - anyway that was the most scary case.”

That experience changed her forever.

“And just seeing the servicemen - it was very heartbreaking to see the wounded servicemen in the hospitals. It was a hospital in Danang where we saw some really pretty wounded and shot up people who were waiting to go back to the United States,” said Frankel.

Frankel and her sister had music scholarships waiting form them for Roosevelt University. But when they returned back to the United States, they realized that they wanted to go back to Vietnam.

The twins then joined an all-girl band. Frankel played bass guitar, and her sister played keyboards.

The group broke up in Hawaii as they were on their way back to Vietnam. One of the band member’s husband was coming back home, and she didn’t want to go.

They did end up performing in Hawaii - in places like the Outrigger Hotel and Davy Jones’ Locker - for R&R people coming from Vietnam and uniting with their spouses.

Her experience was meaningful, she said, because in those days, it was a hostile environment for soldiers coming back from Vietnam.

“So they treated the servicemen with total disdain and disrespect. And now, years later, they realized how we really ought to treasure our military,” said Frankel.

She was on the Welcome Home Vietnam Veterans Day and Traveling Wall committees, and is a lifetime member of the Marine Corps League, Sedona Detachment #1237, and is an honorary commander at Luke Air Force Base of the 944 Medial Squadron.

“I think the most exciting thing is that we have a bench in our honor at the Sedona Military Service Park. I wish my sister was around to enjoy that and appreciate it,” she said emotionally.

Jennie passed away eight years ago from cancer.

“I miss her. She was funny. Real funny,” said Frankel.

Veterans have a special place in her heart because of all the sacrifices they make.

“They give up a lot with their families, they are patriotic, they keep us safe, they are selfless, they are heroic, and they are needed,” said Frankel.

Frankel explained that during her father’s era, the WWII veterans were treated well.

“They would give them housing, and subsidies and all kinds of stuff to make their lives better. They were really very appreciated. And then in the Vietnam War, it was the opposite,” said Frankel.

The Vietnam veterans were not appreciated, she said.

“And now it’s sort of come full circle because our veterans have far more support by everyone. They have a lot of respect,” said Frankel.

People are now thanking veterans for their service, she said. People put their hand over their hearts, salute, and tell them that they appreciate all that they are doing for our freedom, she continued.

Members of the community can support veterans by volunteering, voting, donating, and expressing appreciation, said Frankel.

Frankel, who is on the Verde Valley Military Park committee, is excited for the flag-raising ceremony set for Veterans Day.

She said the holiday is a time to pay tribute to the many thousands of service men and women throughout history who have sacrificed their lives - who were injured and wounded - for our freedom.

“It’s a time to be thankful for the lives that we are blessed to live,” she said.

“Mayor Diane Joens was instrumental in helping to get Garrison Park for us. There wasn’t a thing that we asked for that she didn’t say ‘Let’s make it happen.’ She was really terrific,” said Frankel.

The Verde Valley Military Park brings together the entire Verde Valley and Sedona, she said, and honors everyone who was in service, past and present, who lived in this area.

The Verde Valley Military Park’s ribbon-cutting ceremony is scheduled for Nov. 11 at 1 p.m. at Garrison Park in Cottonwood.