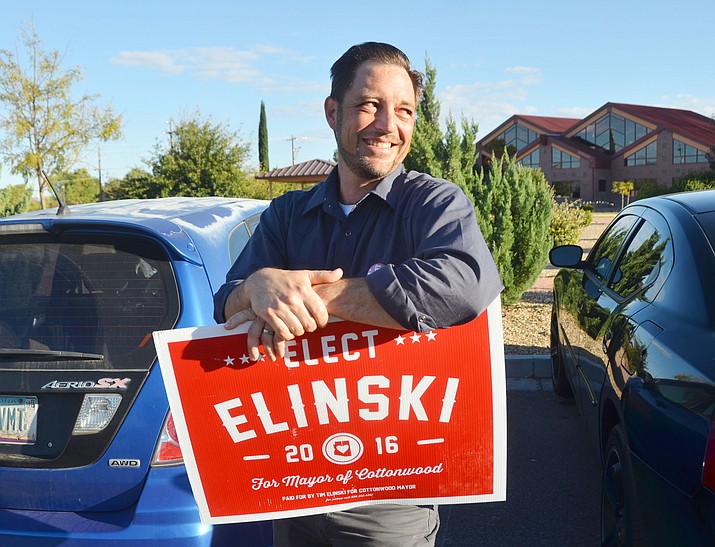 For Elinski, his intentions to succeed Diane Joens as Cottonwood’s mayor became official in October 2015 when he filed the initial paperwork to establish his campaign.

“I’ve been campaigning for more than a year,” Elinski said Tuesday night. “We connected with a lot of people in the Verde Valley and Cottonwood. We made good connections and showed people we care about the direction Cottonwood is headed.”

Elinski was quick to clarify that he is not certain of victory until he has official confirmation on the vote tallies, “but I feel good about it now. We had a positive message, and I feel it was a message that resonated with the voters.”

Elinski credited Grigaitis with bringing a strong message of the need for change in Cottonwood government, “but I brought that same message and we had a more positive message.”

If elected, Elinski said he will immediately begin laying the groundwork for his transition into the mayor’s chair.

In a Wednesday email, Elinski said, “In the coming weeks I plan to meet with Cottonwood administration and the chairs of the various city commissions to see how we can advance the priorities on which I campaigned, and I will meet again with council members to discuss their goals and objectives.  Once the official results are in, and if I am mayor elect, I will begin to connect with stakeholders in the community to plan the first council retreat with our newly elected body.  This retreat will be an informal gathering of your elected representatives where they can set goals for the coming year based on community input.  I will be leaning on many of you to make sure this is a successful retreat where council will have an opportunity to hear from the broadest spectrum of our community on the needs and aspirations of the various agencies and organizations that compose our city.  This input will help us create our strategic plan and strategy for the year and I will work hard to ensure we meet our collective goals.”

Tuesday night, Grigaitis said, “Congratulations Tim, fantastic job. I hope my supporters and I have brought forth a message that will carry forward.”

Grigaitis added that both she and her supporters will continue to monitor the actions of the mayor and council and work with the council for the betterment of Cottonwood.

Considering this was her first-ever foray into the political arena and only losing by 252 votes, Grigaitis said, “I think it’s a very clear indication on where the people of Cottonwood stand. They are tired of not being represented by their elected officials … I hope and pray Mr. Elinski and the council take that to heart.”