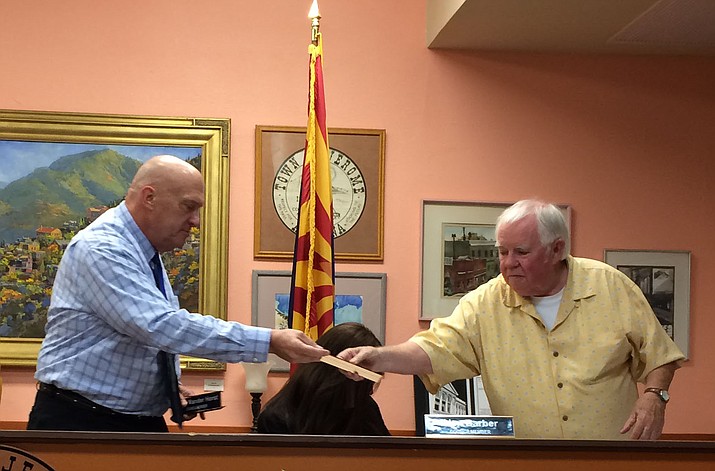 As is tradition in Jerome, Vander Horst was elected mayor by a vote of council based on receiving the most votes of any council candidate in the Aug. 30 primary.

Once minutes were approved, Currier addressed the council with some outgoing remarks.

“I will remain on council. I enjoyed being mayor. I think it is fun,” he said.

Currier briefly recapped a few adventures faced as mayor and wished the incoming mayor his best.

“I will continue to enjoy the council but I won’t be mayor,” Currier said.

The new mayor wasted no time in getting down to business by announcing his priorities for the Town of Jerome: Infrastructure, parking, historic preservation and cooperation with other agencies. Of most consequence to the public was Vander Horst’s formalizing the process of citizen feedback.

“Lastly, I want to make sure we include the public in our discussions. We are going to be using Robert’s Rules of Order (a guideline for meeting protocols) in order to do that,” said Vander Horst.

Previously at Jerome public meetings, members of the public could offer a question or comment from their seat at most any given time. While some say it facilitated discourse and assisted decision-making, others could view it as a distraction or even a disruption at times.

“In the future, when there is any item on the agenda that somebody wants to speak about, we will be having them come-up to the lectern to address the council and not from the back of the room,” said Vander Horst.

Vander Horst also added that he would like the Pledge of Allegiance recited at all meetings and an updated General Plan.

“Our last General Plan was 1981. How I understand the statute is that we are only 25 years late,” he said.

In other items taken-up by Jerome council Tuesday, Town Attorney Bill Sims was retained with a new contract at the same rate and terms.

Last meeting, council had discussed issuing a Request for Qualifications to assess its options, but no action was taken other than to table the item until tonight’s meeting.

Another item for consideration by council was whether to follow the City of Prescott’s idea of passing a resolution regarding regulating - - but not banning - - vacation home rentals.

Some felt further review was in order before acting.

“I think we discussed this with Mr. Sims. It was his idea it really didn’t do much. As I understand it, it covers group homes,” said Currier. “Personally I’d like to wait and see. They have not passed it.”

“My opinion is we should keep a really close eye on this and see what pros and cons go with it,” said Kinsella. “I don’t want to get crosswise with the state in any way, shape or form.”

Former Town Planner Bill Jensen said, “How do you define or get around the length of a tenancy? You will be challenged by this.”

Others felt the time to act was now.

Doug Freund, who until last meeting was Jerome’s Vice Mayor, said, “I want to urge council to consider meeting with the attorney. We have a very short time to proceed. If you table it for more than a month, you may not be able to do it,” citing upcoming changes in legislation.

Bachrach offered, “Would it behoove us to begin a draft that addresses this issue as it affects us in Jerome?”

In the end, no resolution was forthcoming by council.